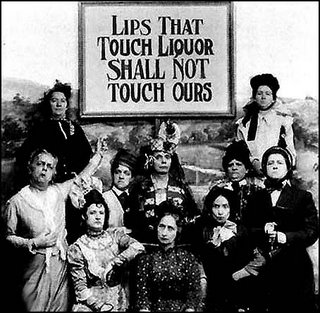 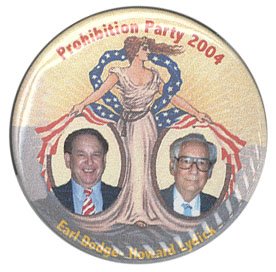 This morning I had a very pleasant meeting over tea and coffee with my parish priest. We chatted for the better part of two hours covering a wide range of subjects. One of the topics which came up was that of drinking. I don’t recall exactly how it came up but I remember talking about Woodrow Wilson’s Navy Secretary Joesphus Daniels, a fire breathing puritan who was a passionate prohibitionist. His name is still an epithet among enlisted sailors in the Fleet as the man whose first order was to end the ancient tradition of the daily ration of rum in the Navy (1 pt per man per day) in 1913. The Navy remains dry to this day.

As part of the conversation I noted that there still exists a Prohibition Party here in the United States. So imagine my surprise when I pop online tonight to check email and the world news, and discover that prohibition is once again a hot topic in some parts of the country. The New York Times ran a fascinating article on efforts by some big business interests to repeal the few remaining blue laws that ban the bottle in some localities. Yes there are still a few towns and counties that are drier than Beefeaters Gin served straight.

This has made me do a little thinking on the subject. Since a particularly bad (some would say fun) night on the town in Barcelona Spain with some shipmates in 1988 my drinking has ranged between light and non existent. So, do I favor prohibition?

No. I am at heart a libertarian and trying to tell people how to live their lives by passing laws has always struck me as rather foolish. We have been down this road before and it did not work. I oppose prohibition for the same reasons that I oppose outlawing gambling, adultery, homosexuality and a host of other social vices. In a free country you can’t legislate private morality. Beyond which these sorts of laws are notoriously ineffective. I was once told by someone I greatly respected in the Navy that I should never give an order I was unable or unwilling to enforce. It reduces respect for authority in general and for me in particular.

Having said all that, the prohibitionists may be wrong but they are wrong for all the right reasons. It is futile to even attempt to argue that alcohol abuse is not one of the root causes of a lot of problems in this country. The vast majority of highway fatalities are alcohol related as are more than half of all violent crimes. Alcoholism and drunkenness contribute to family quarrels, child abuse, divorce, depression, suicide, marital indiscretion, and all manner of accidents (many of them fatal). It can also be a lead into other vices and addictions including gambling, drug addiction, prostitution, sexual depravity and the like. Our college campuses today have become dominated by a culture of drunkenness. Binge drinking is rampant among young people. How many times have we read the tragic story of some kid who died at a fraternity party from alcohol poisoning or from some form of alcohol induced stupidity? Ask yourself dear reader, how many friends, loved ones and acquaintances have you gone to funerals for at least in part because of booze? I have lost count.

Do I favor prohibition? No. But I do think we would be vastly better off as a nation and a society if we all took the pledge and went on the wagon.
Posted by John (Ad Orientem) at 2:38 AM

I loved the picture, and just wondered whether the owners of the lips would want to touch theirs!

I have to say, though, that I am no libertarian. A society needs moral boundaries, and should punish behaviors that are so, well, destructive.

I am not yet, however, a prohibitionist.

Steve,
I thought it was pretty funny too.

Fr. David,
I understand the natural inclination to set and enforce moral boundaries. And where one’s behavior infringes upon the rights of another I support enforcement. However I have two major issues with regulation of what is essentially private behavior by the state.

Firstly morally predicated laws have been historically ineffective at best. The laws are often ignored and when they are enforced it is frequently in a manner that is arbitrary and capricious. Laws that are widely ignored tend to reduce respect for authority as Blessed Augustine noted, and anyone who has ever driven through Iowa when the speed limit was 55 could affirm.

My second objection is when we start deciding on what to make criminal etc. whose moral boundaries will we be codifying into our laws? This country is not homogeneous. Will we be setting laws that reflect Protestant morality or Catholic? I am guessing we are not hoping for Orthodox moral boundaries since the most recent figures I have been able to find indicate we constitute slightly less than 2% of the population of the United States. My grandmother (a devout Catholic) could recall being forced to read from the King James Version of the Bible when she was in school and to recite the Protestant version of the Lord’s Prayer. What boundaries are too restrictive? Who gets to set them? What about Jews Muslims Mormons and other non-Christians? This is a slippery slope. Once we set the precedent that private morality can be regulated it becomes very hard to say “No, you can’t go there.”

Sigh. My grandfather, a rather fundamentalist Methodist minister in the 19-teens - 40's, voted Prohibitionist til his children convinced him (sometime in the 40's) he was throwing away his vote; "Father, when was the last time one of your candidates won?". -- Bob K.

Seriously, alcohol abuse is a societal evil only recently eclipsed by fatherless homes and drugs. But Prohibition, at least of alcohol, was tried and failed miserably. (I think it is possible to win a War on Drugs, but that's another story.) Personal responsibility rooted in good parenting and an understanding of one's relationship to God are the only answers, and they are answers the U.S. govt. can't/won't implement.

BTW, I understand there is something of a schism within the modern Prohibition Party between the "old liners" of Earl Dodge and the Partisan (Prohibition) Historical Society, which nominated Pastor Gene Amondson in 2004.

Which proves people will go to war to become sovereign of the smallest kingdom.