Israel Reminding its Enemies "We Have Teeth" 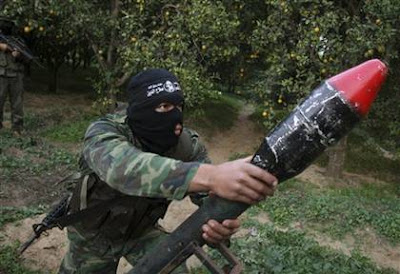 A Palestinian Terrorist prepares to fire a rocket into Israel three days before Israel counter-attacked. Hamas has fired more than 1000 rockets and several hundred mortar rounds into Israel over the last year.

JERUSALEM — Israel’s military operation in Gaza is aimed primarily at forcing Hamas to end its rocket barrages and military buildup. But it has another goal as well: to expunge the ghost of its flawed 2006 war against Hezbollah in Lebanon and re-establish Israeli deterrence.

On the second day of the offensive, which has already killed hundreds and is devastating Hamas’s resources, Israeli commanders on Sunday were lining up tanks and troops at the border. But they were also insisting that they did not intend to reoccupy the coastal strip of 1.5 million Palestinians or to overthrow the Hamas government there.

This is because whatever might replace Hamas — anarchy, for example — could in fact be worse for Israel’s security. So the goal, as stated by a senior military official, is “to stop the firing against our civilians in the south and shape a different and new security situation there.”

Read the whole story.
Posted by John (Ad Orientem) at 3:23 AM

Since this blog discusses Orthodox Christianity so frequently, I was surprised that you address the Gaza situation without quoting from (or linking to) comments from Orthodox Christians about the events (especially those in that part of the world). It might have more relevance than a random story on the New York Times' website.