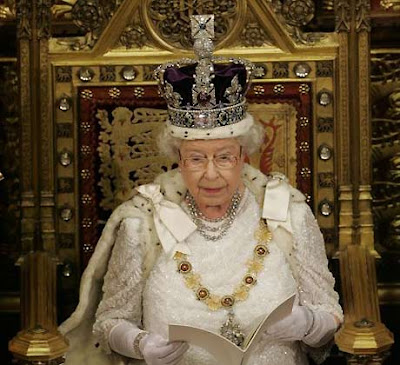 She is venerated around the world. She has outlasted 12 US presidents. She stands for stability and order. But her kingdom is in turmoil, and her subjects are in denial that her reign will ever end. That’s why the palace has a plan.

I think this is a generally good article that mostly (for a left leaning paper) deals with a sensitive topic reasonably well. But I do disagree with one point. The author characterizes The Queen's reign as a period of decline for Britain. I think that is inaccurate unless one is focused solely on the loss of the Empire. I don't view that as a negative. The Empire was hugely expensive and a great burden to the people of Britain. The modern day British Commonwealth is a vast improvement. Also the author completely ignores the dramatic improvement in the standard of living for most Brits over the last 65 years. When she took the throne the UK was still recovering from World War II and there were staggering gaps in income and standards of living. Rationing was still in effect for some items into the middle 50's. Housing for the lower classes was dreadful. And the country was effectively bankrupt. All of that has changed and the UK is the 2nd largest economy in Europe with one of the highest standards of living in the developed world. The Empire may be gone but Britain enjoys good relations with most of her former colonies and at least 15 still recognize The Queen as their head of state. So, I think the author got that part wrong. But otherwise it's a good read.
Posted by John (Ad Orientem) at 9:49 AM

I think she is holding on in order to be able to pass the throne to the current Duke of Cambridge rather than the current Prince of Wales.

Niall Ferguson makes the point that the Empire was of benefit overall to Britain, and that London sacrificed the Empire in the two World Wars.

Yes, sacrifice the many to benefit the few. Y'know there's a reason why Indians don't miss the Empire. inb4 "Empire was good for India too"