Fearing a resurgent and aggressive Russia, Sweden is rearming 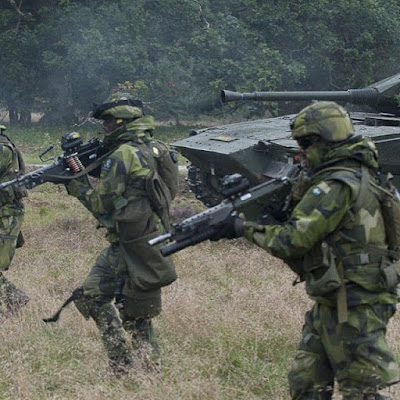 ...Like most European nations, Sweden cut its military spending sharply after the cold war ended, from about 2.5% of GDP in 1990 to barely 1% by 2010; equipment was scrapped and bases were closed down. The shipyard on Muskö was sold off to German engineering company Thyssen Krupp.

But the occupation and annexation of Crimea by Russia in 2014 “changed things completely”, Granholm said. “It showed that this is what Russia does to its smaller neighbours. Now it is proving a difficult and long-term task to rebuild the armed forces.”

Swedish defence company Saab bought out Thyssen Krupp in June 2014, after some arm-twisting that involved mass recruitment of Krupp’s staff and a dawn raid by the defence ministry on Krupp’s shipyards in Malmö, ostensibly to rescue military secrets.

A few months later, Stockholm was gripped with panic after an alleged Russian mini-submarine was spotted in its waters, reviving memories of a Soviet nuclear sub that ran aground in Karlskrona in 1981, sparking a decade of high-profile submarine scares.

The submarine hunt of 2014, details of which still remain unresolved, saw opinion polls swing towards Nato membership for Sweden and presaged the first of several boosts to defence spending. For the first time in more than two decades, the Swedish government embarked on a sustained expansion of the defence budget, pledging to increase spending from 43bn Swedish crowns (£3.5bn) in 2016 to 50bn in 2020.

Other recent moves to strengthen Sweden’s military preparedness include bringing back conscription, and a leaflet delivered to every household explaining what to do in case of a nuclear attack.

Sweden can't even keep out Somali Muslims. How do they expect to keep out Russians?