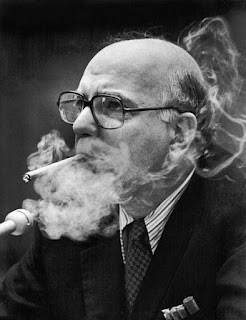 He was the Chairman of the Federal Reserve from 1979 to 1987 and is remembered chiefly as the man who took the heroic (and brutal) steps required to break the high inflation that had dogged the country through the 1970's and early 80's. He gained a reputation for being the guy who said what needed to be said and did what needed to be done even if it was deeply unpopular. And jacking short term interest rates deep into double digit territory, thereby all but wiping out credit markets and plunging the country into two recessions (that could probably be classified as a minor depression) in order to arrest inflation was hugely controversial. But it worked and history has generally been kind to Volcker.

A staunch advocate of fiscal conservatism; he had a personal aversion to debt and spending that was legendary. He was so frugal that he was still driving an old Nash Rambler when the driver's seat collapsed. Rather than break down and buy a new car (or even a newer used one), he jammed a small chair under the driver's seat to prop it up and continued to drive the Nash for years. His only extravagance was his love of cigars, though even there he stuck to the cheap generic brands commonly found behind the checkout counter in gas stations and convenience stores.