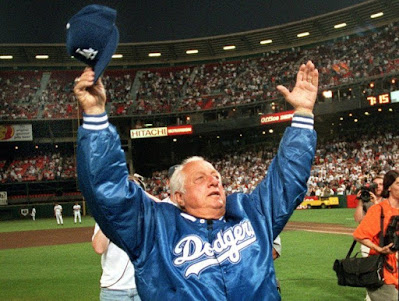 A man sometimes referred to as Mr. Baseball, Tommy Lasorda has died at 93. It was said that he bled Dodgers blue. I had the honor of meeting him back in the 1980s and can say he was a marvelous gentleman with a great sense of humor. One story he told was about the time he was in Chicago for a day game against the Cubs. It being Sunday and Tommy being a devout Catholic he went to Mass that morning. During the service he saw the Cub's manager, apparently also a Catholic, lighting candles in the front near the altar. Later in the game when the other manager was making a pitching change he sent a note to the opposing dugout

"It won't work. I blew out your candles."