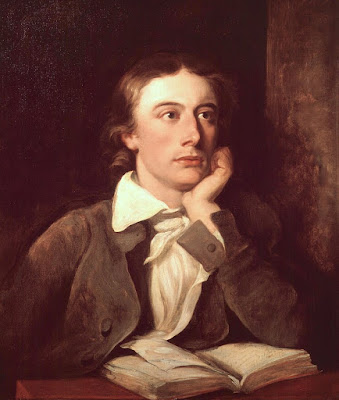 A thing of beauty is a joy forever: its loveliness increases; it will never pass into nothingness -John Keats
He knew he was dying for at least a year before the end came. The first time he coughed up blood he told a friend that it was his death warrant. He suffered repeated hemorrhages in his lungs as the consumption took hold. In response his doctors bled him. In September of 1820 he took leave of his fiancé Fanny Brawne and on the advice of his doctor left England for the more hospitable climate of Italy. His health continued to decline and he was in great misery during the voyage. Joseph Severn, his friend and traveling companion, tended to him as best he could. After a brief stay in Naples, which Keats did not find congenial, they moved to Rome and took up residence in a villa next to the Spanish Steps. It still stands today. There his condition deteriorated as he was placed on a diet of a single anchovy and piece of bread per day in the hopes of stopping the flow of blood to his stomach. The doctor also continued to bleed him. Fearing he might commit suicide, Keats was denied laudanum, the only thing which had eased his pain. Towards the end he slipped in and out of consciousness and was often gripped by fever and delirium. Severn wrote that the agony was so great that when Keats would wake he often broke down and wept with the realization that he was still alive. At length John Keats died on February 23, 1821. He was buried in the Protestant cemetery in Rome.
When word of his death reached Fanny Brawne she was inconsolable and remained in deep mourning for six years. In the end she did marry, twelve years after Keats death, and she outlived him by forty years. Dying at just 25, Keats joined many of the other tragic figures of the English Romantics who also died young.
Posted by John (Ad Orientem) at 11:49 AM