In Scotland- A whiff of scandal 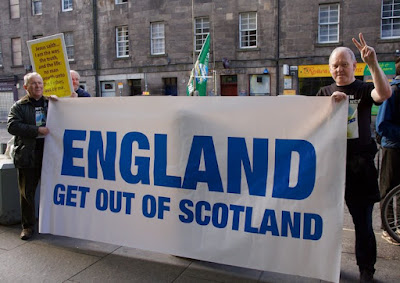 “It’s very clear that Nicola Sturgeon is damaged goods and her days are numbered. She is by no means off the hook.”
The sort of verdict you might expect from a flag-waving Unionist at the end of a tempestuous week for the Scottish National Party. Except that those words were spoken by a former deputy leader of the SNP itself, even before Alex Salmond’s extraordinary return to politics yesterday.
The jubilation among the First Minister’s supporters after she survived two inquiries into her role in the Alex Salmond affair lasted all of three days before Mr Salmond pulled back the tarpaulin on his ultimate vengeance weapon, the Alba Party, which threatens to blow up the SNP’s chances of a Holyrood majority in the May 6 elections.
If the SNP – currently a minority government – achieves an overall majority, the party’s plans to force a second independence referendum will be rapidly accelerated.
There is a growing belief within the SNP, however, that the party will fall short of the mark, and that if “IndyRef2” does happen, it might not be with Ms Sturgeon at the helm.
The SNP’s poll rating peaked at 58 per cent last autumn, and stayed above 50 per cent for the whole of last year, putting the party on course for a majority, but that figure is now 46 per cent, according to a recent Opinium poll, suggesting the controversy has taken its toll.
The twin inquiries into the SNP’s handling of sexual misconduct allegations made against former leader Mr Salmond have exposed to public view the toxic civil war between the Sturgeonites and the Salmondites, like a manhole cover being lifted off a sewer. Mr Salmond now intends to go another round with Ms Sturgeon in a fresh court case that could reveal damaging details suppressed in the inquiries.
Then, at 2pm on Friday, came the unexpected announcement that Mr Salmond is to lead a new party into the elections. Its aim, he claims, is to achieve a “supermajority” for independence in the Scottish parliament, but its effect is more likely to be splitting the vote between the SNP and Alba (the Scottish Gaelic name for Scotland).
Mr Salmond said on Friday that Alba was “planting our saltire on a hill” and that “in the next few weeks we shall see how many will rally to our standard”.
In truth, he is parking his tanks on Ms Sturgeon’s lawn, driving a wedge into the split that already exists in the SNP, and calling on its members, MPs and MSPs to defect to his side.
If he is elected to Holyrood, it will be the start of an all-out war between Ms Sturgeon and Mr Salmond for the leadership, and the future, of Scotland.
Jim Sillars, the former deputy leader of the SNP, said: “I was a long-term critic of Alex Salmond when he led the SNP, and he of me. I take back not a word, and I expect him to be the same.
“But Brexit, the pandemic, the failures of the SNP, the embarrassing stark lack of quality in its ranks in Holyrood, means we are in a new situation when old grievances need to be set aside. I welcome his return to frontline politics.”
He added: “People have seen a face of the Scottish government that is unacceptable. People are not stupid. They know the government has misbehaved and engaged in a gross misuse of power.
“This government is politically corrupt and the tentacles of political corruption have spread to institutions in civic society.”
One serving SNP MP admitted: “Nicola’s brand has been tarnished. I think this will have an impact at the polls because people have seen the in-fighting and the rage.”
Read the rest here.
Posted by John (Ad Orientem) at 4:34 PM

Not to be provocative or anything, but doesn't this suggest that we should be welcoming the kids coming over our southern border, finding families for them, educating them and letting them work so that they're paying taxes and social security like everyone else?