Are we entering a golden age of the conspiracy theory? 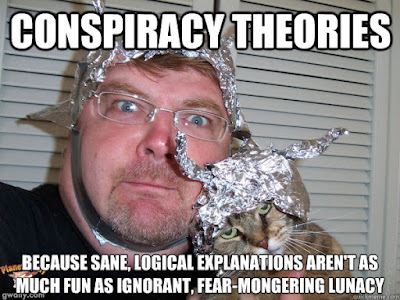 Donald Trump’s assault on “terrible, dishonest” journalists (“the lowest form of life”) has become one of the hallmarks of his fledgling administration. But as many have noted, this posturing echoes developments closer to home. It was Michael Gove, of course, who claimed during the Brexit campaign that “people in this country have had enough of experts”.

Scott Pruitt, the new chief of the US Environmental Protection Agency, certainly seems comfortable dismissing scientific consensus: “I believe that measuring, with precision, human activity on the climate is something very challenging to do, and there’s tremendous disagreement about the degree of impact. So, no, I would not agree that it’s a primary contributor to the global warming that we see.”

From a certain perspective, this is knockabout political theatre. And a little scepticism is prudent, for sure. Blithely accepting whatever we’re told is clearly unwise. Information can be unreliable; cover-ups do occur. But if we dismiss everything we hear in the media, if we assume that scientists and scholars are untrustworthy, we leave ourselves vulnerable to manipulation, misinformation, and rumour. This makes us wonder: are we entering a golden age of the conspiracy theory?

Since this issue is really about the Right, perhaps this is an outlet those on the Right open to 'Facts, Logic and Reason' over and against Breitbart, Rush, Fox News, and Infowars might be interested in subscribing to:

Of course, you are still likely to hear that cutting taxes and regulations are the cure everything from the common cold to recessions, acid rain and why they don't make things the way they used to - though it should be noted this cure-all is not applicable to homosexuality, abortion, defense, illegal immigration, and flag burning which requires government to do more more more. Still, if you are on that end of the spectrum the new Weekly Standard may be the place to start.

We should like to know who's paying the salaries of these scientists.

The two main contributing factors to the rise of conspiracy theories:

1) The sinking of both news media and the academy to blatant partisanism, as "shocking revelations" uncover time and time again.

2) The way that so many conspiracy theories have actually been revealed to be true in recent years.