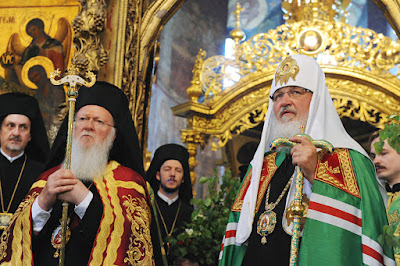 No, this is not about the Roman Catholic Church. It is about the Orthodox. Sadly, evidence is rapidly accumulating that the Ecumenical Patriarch intends to take actions in the ongoing schism within the Ukrainian Orthodox Church that are all but guaranteed to provoke a major crisis within the Church. I am still praying that this will not happen but reports are mounting daily, without any denial from the EP or those closely connected to him, that he intends to issue a tomos of autocephaly to the schismatic Ukrainian Orthodox Church of the Kievan Patriarchate.

It is inconceivable that the Russian Church will not respond by breaking communion.

The question is, how far will the schism spread?

I think it quite possible that the Serbians and Bulgarians will side with Moscow. We can assume the ethnically Greek local churches will side with Constantinople. I am including here the Patriarchates of Alexandria and Jerusalem. The latter is of course composed of 99% Arabs, but the hierarchy is 99% Greek.

As for the rest... The Romanians I honestly have no idea. There is not a lot of love for Russia there but I just don't have any feel for how they will go. The Church of Georgia is close to Moscow. Would that be enough to provoke their taking sides in the schism? Then there is the Church of Antioch. They are already out of communion with Jerusalem over that church's intrusion on Antioch's canonical territory and they are none too thrilled by Constantinople's refusal to come to their aid. And lastly there are what may be called the micro churches... Albania, the Czech Lands, Poland and the OCA.

Thanks for letting me speak my peace

In case you missed them I have guidelines for comments linked in the side bar. Here is the link...

I'm sure I don't know enough about this situation to have any useful opinion, other than noting that I'd hate to see any serious schism in the Orthodox Church.

Mine is more a question: What are the criteria for the EP making such a declaration? Is this based on the recently-gained political independence of the Ukraine, and the tensions surrounding the Russian occupation of the Crimea? Is it sensitive because of the place of Kiev (as I think i understand it) in the history of Russian orthodoxy?

Don't mean to put anyone on the spot. If there's a simple cite that would do it.

I don't see why the Ecumenical Patriarchate (EP) rumors are jumping straight to autocephaly rather than the idea of the EP simply accepting the Ukrainian Orthodox Church of the Kievan Patriarchate (KP) under its omophorion. The rationale would be the same, i.e., we never surrendered our canonical rights in Ukraine even if we have allowed Moscow de facto authority for many centuries. I wonder if "autocephaly" is a bargaining position that would allow the EP to "compromise" by accepting the canonicity of the KP under its wing. I can't imagine a canonical division of Ukraine by ethnicity (i.e., Crimea and eastern areas under Moscow, Kiev and the rest of Ukraine under the KP/EP) would be possible, tenable, or acceptable to either Church or either country. Maybe there would be a view toward some irregular situation there such as there is in the so-called diaspora, i.e., better to have the KP (and later the Ukrainian Autocephalous Orthodox Church?) canonical in a canonically irregular but tenable situation a la North America than to leave the KP outside the church.

I apologize for being a bit cynical, but ...

Historically, the principal criterion used by the Ecumenical Patriarchate to declare autocephaly has been the principle of fait accompli: a Church under the jurisdiction of Constantinople in a particular territory unilaterally declares itself autocephalous (or, in some cases, the civil authority of the country declares it); Constantinople refuses to recognize it and there is a schism for a number of years or decades; and at length, Constantinople realizes that there is nothing they can do, practically, to re-assert their authority and so they give up and recognize the new autocephalous Church as an accomplished fact. This is the origin of the autocephaly of Russia, Bulgaria, Romania, and Greece.

The current situation with Ukraine is a bit different. Ukraine has been under the jurisdiction of Moscow (and recognized as such by Constantinople) since the seventeenth century. So Constantinople is proposing to grant autocephaly, not to an area already under their jurisdiction, but to a territory currently under the jurisdiction of another autocephalous Church. It is as if Constantinople is withdrawing their recognition of the autocephaly of the Russian Church (at least with respect to Ukraine) in order to grant that autocephaly to a different Church body. What criteria or basis they have to offer for doing that, I am sure that I do not know.

Constantinople's attempt to exercise jurisdiction over a part of another territorial Church does not seem to me to be very Orthodox. For this reason I agree with John that it is inconceivable that the Russian Church will not respond by breaking communion.

The key would seem to be whether the EP agrees that Moscow's authority over Ukraine was "recognized... by Constantinople". De facto recognition that the far more powerful Russian state and its state-controlled Patriarchate controlled Ukraine and the Orthodox there is quite different than accepting that fact. The EP may be focused on the fait accompli of Ukrainian independence from Russia and a large number of Orthodox in that independent country not wanting to be under what they would view as the state-controlled Church of a hostile power. Since The Moscow Patriarchate seems unwilling to normalize the status of millions of Orthodox due to its insistence Russians and Ukrainians are the same (in fact, it is often stated there is no such thing as a "Ukrainian" or a "Ukrainian language", it was all part of a Catholic and/or Western plot to weaken Russia) and to Ukrainian's insistence there are wholly separate from Russians and therefore need their own autocephalous church (cf. the Balkan churches), then perhaps it is time to simply acknowledge that Ukraine (and many former Russian/Soviet satellite countries) is as "irregular" as the diaspora meaning there needs to be overlapping, canonical jurisdictions. If one believes there is no salvation outside the Church and if we acknowledge the fact Orthodox is ethnically tribal and this is tied up with autocephally, well, then, why are we allowing millions of Ukrainians to perish outside the Church for the sake of canons no one really follows and territory. Is territory more important than salvation?

And, yes, this would cause a schism. But, the Orthodox are always schisming with each other, so who really cares? Bulgaria/Serbia off and on, Antioch/Jerusalem, ROCOR/almost everyone, OCA/almost everyone, etc.