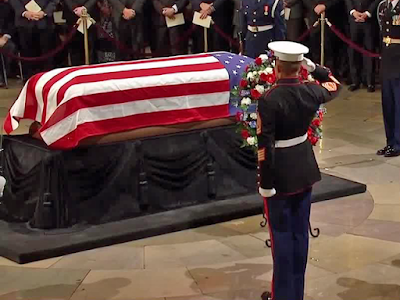 G H W Bush was an imperfect man who made his share of mistakes. But he was all class and one of the last of the old school (and old money) aristocrats with a strong sense of noblesse oblige. Whatever one may think of his presidency, on balance I think it was pretty good, it's hard to fault the man's character.

In the end I think his last great act of public service was dying when he did. In an era where our politics have become toxic, our president profoundly narcissistic, venal and morally corrupt, Mr. Bush reminds us that selfless public service, honor and common decency are not incompatible. He leaves us with a glimpse of what once was, and can be again.

Far from the despondency expressed by many pundits who saw this as a funeral for all that was good in the Republic, I was left cautiously hopeful. I refuse to believe that Mr. Bush represents the last gasp of a dead world. Rather I see something that we can aspire to. The trick is to look not for demagogues who will tell us whatever they think we want to hear, but rather men of honor and character who will tell us what we need to hear. Men who seek the greater good, standing for something more than self and without trying to enrich themselves and their relations in the process.

To be clear, I am not trying to canonize President Bush. But in a world temporarily disordered by the ascendancy of lesser men, one cannot help but note the contrast and hope that in due course this too will pass.
Posted by John (Ad Orientem) at 6:28 PM

What I find sad, John, is that we see this clearly only when looking back. I recall with some sadness when the body politic rejected his decency for the likes of Bill Clinton. We have no one to blame but ourselves.

He was a one-term, not very popular President. It is impossible to say, in retrospect, whether Gulf War I was prudential. The invasion of Panama and prosecution of its military dictator was a stupid joke. We fired him after four years.

GHW Bush is a proxy for old WASP America and the institutions they built, and that's what's unconsciously being mourned. Those institutions are now rotten to the core. The Bush and McCain funerals are bonding ceremonies for the ruling class and a rebuke to Trump, who was voted into office in the hope of destroying the institutions. Unfortunately it looks like the disease will not be amputated and we will just have to wait for things to run their natural course.

"things to run their natural course"

You make me think of Kipling's Recessional

Lo, all our pomp of yesterday
Is one with Nineveh and Tyre!

... and Rome and on it goes for each of the great empires.