The Economy: How bad will it get? 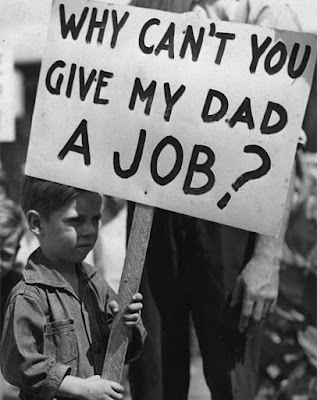 The overwhelming consensus is that the best case scenario, is going to dwarf all other post World War II recessions. Many economists expect both the economic contraction and real unemployment figures to rival those of the early 1930s in the dark days of the Great Depression.

So, are we going to have a depression? That would depend on how deep the economic downturn goes, and importantly, how long it lasts. It is almost a running joke that use of the 'D' word is prohibited in academia and among business people, as well as the talking heads on the various financial news networks, except when used in historical reference to the events of the 1930s. And it  doesn't help that there is no hard and fast definition of what constitutes a depression.

Most economists and historians have avoided labeling any of our post-war downturns as depressions, though I would argue that two probably meet the vague definition. The first would be the downturn that began in the last year of the Carter administration and continued through the first couple of years of the Reagan administration. Roughly late 1979 to 1983. The second would be the most recent financial crisis of twelve years ago. A number of countries and regions, notably in southern Europe, never recovered and were still experiencing devastating unemployment aggravated by sovereign debt crisis right up to the arrival of COVID-19.

To my mind the odds of a quick 'V' shaped recovery that Wall Street seems to be hoping for are poor. The economy, especially in our globalized era, cannot be turned on and off like a light switch. When you break the glass and hit the red button labeled "Emergency Stop," the engine is going to seize. In furtherance of the damage to the engine is that we don't have either a cure or a vaccine anywhere on the horizon. This means all of the global distancing rules are going to remain in effect for the foreseeable future. And the mass unemployment is going to send shock-waves out inflicting even more damage. Unemployed people generally can't afford much in the form of goods and services. So what we have is the prospect of an economic contraction functioning like a giant snowball rolling down hill while gaining both size and velocity.

Fortunately we do have a few things going for us. The first is that we have learned a bit since the 30s. So the catastrophic policy mistakes of that era are, we hope, unlikely to be repeated. Raising taxes (both Hoover and FDR), massive increase in government regulation of the economy (FDR), tightening monetary policy (the Fed of the early 30s) and raising protectionist tariffs (Hoover). The last one is a bit alarming since we have a president who is enamored of economic protectionism.

Also unlike in the 30s, we do have something of a social safety net. Granted, it is among the weakest in the developed world. But it is like noon on Miami Beach compared to the long winter of the early 30s where the unemployed and homeless were almost entirely dependent on private charity, which quickly became overwhelmed.

Which brings us to; where are we going? There are just too many variables to give any kind of concrete prediction. But I will make a few general observations. The medical community seems resigned that this thing is going to be with us for years. So until a vaccine is developed we can expect succeeding waves of COVID. Some of those could be worse than what we have experienced thus far and could inflict even more loss of life and economic damage. Unemployment is likely to breach 20% and the contraction in GDP is unlikely to be less than 25%. In that scenario I don't see even the beginning of a meaningful recovery for at least a year, and more likely two to three.

So... depression? Yeah, very likely. Great Depression Part II? I doubt it. It was the government that put the "Great" into the depression of the 1930s. And while I always encourage taking a deep breath before putting any upward limit on the stupidity of politicians and bureaucrats, if... we can avoid the mistakes of the Hoover/Roosevelt years, I am cautiously hopeful that the worst will be over within four to five years.

But for now, I think we are just going to have fasten our seat belts and hang on. Because even the rosiest predictions suggest we are in for one hell of a bumpy ride.

(To those who are fortunate enough to be doing OK, please remember the many who are not.)
Posted by John (Ad Orientem) at 6:20 PM