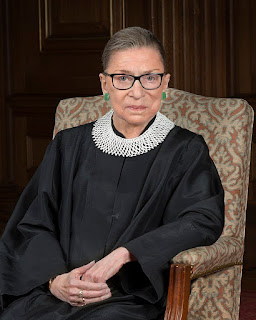 Prayers for her family and the country.

This election just got even more serious. I don't think Trump/McConnell have the votes to ram a nominee through the Senate before the election. Too many GOP Senators are fighting for their political lives. If Trump is reelected then obviously he will have an uncontroversial right to nominate Ginsburg's replacement. But things could get very ugly if he loses and Trump tries to push through a nominee before the next president takes office and the next Senate is seated. That kind of bare knuckled power play would likely provoke the Democrats, assuming they have a majority in the new Senate, to pack the court in retaliation.

It's far too soon to get a handle on how this is going to play out. But one possible scenario is the GOP and the Democrats may cut a deal along the following lines... no new nominee until after the next inauguration in exchange for a pledge from Democrats not to pack the court if they win both the presidency and the Senate. Unfortunately the political atmosphere, both in DC and the country more broadly, is so acrimonious right now that I am not sure there is a sufficient level of trust to cut a deal of that magnitude. There will be heavy pressure from the far wings of both parties to stake out extreme positions.

If this isn't handled right, we could be on the cusp of a serious constitutional crisis.

"Pledge from the Democrats . . ." What in God's name would make anyone put
their trust in that?

Trump speaks a lot about losers. He's behaving like one. Last time he yakked about how we'd get tired of winning... well, I'm still waiting to win. But here's the thing: REAL Winners don't wine or act like losers. The gambit to pack the court either with a GOP candidate about 6 weeks before the election or after, or by the other party in retaliation... both are losers tactics that suggest bitterness. Winners take a blow and don't flinch. To borrow and add to Biden's slogan, winners "build back better..." without bitterness.

Do whatever. Were we to solve controversial issues through legislation, we'd work things with more consensus by necessity and without as much bitterness in the mouth of the minority party's resistances. As testament, I note that many GOP "issues" represented court decisions that were not followed by legislative or Constitutional ammendments to resolve and solidify. By contrast, Brown vs. Board of Education was followed by the Civil Rights act within 10 years. Fairly, some of us would contend there is more work to be done there, but at least there was a bipartisan solution. The Court should resolve less and push back more often for legislative solutions. Hubris will be the Court's downfall. Better to find humility in advance and preserve their status than to be reduced against its will.

Has that train left the station? We'll see.