There are widespread reports that at least some aspects of the Great Recession may be hitting bottom. Certainly if we believe Wall Street things are on the mend. The DOW is up 35% and the S&P 500 is up 40% since their lows in March. Surely this is a sign that Happy Days are at least on their way if not yet actually "Here Again."

To which I respond... maybe and maybe not. There is a very interesting phenomenon that shows up during periods of protracted economic decline or stagnation called a "bear market rally" also sometimes known as a "suckers rally." This is when investors desperate for any sort of good news latch onto the first not horrible news and read it as an indication that a corner has been turned and economic recovery is on the way.

The main characteristic of the bear market rally is a sudden sharp rush by speculative investors trying to get in at "the bottom" and score some big profits. This mass speculation temporarily drives up the value of equities and the overall indexes but it is not sustainable long term if the recovery is not real. A bear market rally ends when people begin to realize that the situation is not as good as hoped and there is a mass rush for the exits. In some cases this has precipitated stock market crashes that were as bad as or worse than the ones which may have signaled the beginning of the economic downturn. Such was the case in 1930.

In early 1930 following the crash of 1929 there was an almost violent rally on Wall Street as investors, believing that the crash was an anomaly and that damage to the broader economy had been minimal, started to dive back into the stock market. By April of 1930 the market had recovered about half of its losses from the crash of '29. It then slipped slightly and traded sideways into the middle of the summer when it dipped again. There followed a couple months of sideways trading and then the floor fell out. 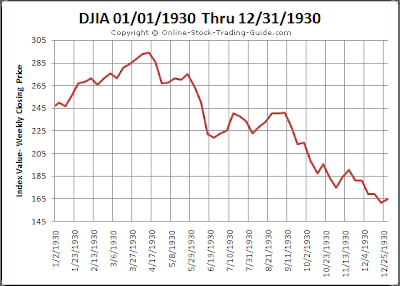 The stock market crash that began in September of 1930 did not end until July of 1932. When the market finally bottomed it had lost 90% of its value from its high in August of 1929. It would not recover its pre-crash value until 1954, a quarter of a century later. Even after the great crash of 1930-1932 there would be a series of bear market rallies and mini crashes right up until the outbreak of the Second World War finally stabilized the economy. 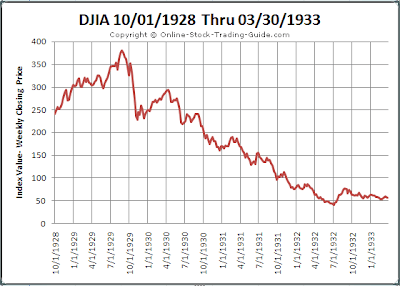 Bear market rallies were also seen on a number of occasions during the stagflationary period of the 1970's.

It is not my intention to declare that what we are seeing today is a repetition of the events of 1930. There are important differences that could be fairly pointed out between the present day and age and the early years of the Great Depression. But I will say that if you look at the events of the last twelve months including the performance of the stock market, the similarities are chilling. One need only look at a chart of the stock market's performance over the last year to see the dangerous pattern.

And it is a fact that there has never been a stock market rally that was anywhere near the levels we have seen since the bottom in March that did not turn out to be a suckers rally. If this rally is the real deal, it will be one for the history books.
Posted by John (Ad Orientem) at 12:27 AM

One major difference though, I would think, is that the government responded to matters in the early thirties with measures that ended up being deflationary. In the present climate, I would expect stagflation or hyperinflation as the more likely outcomes of what has been going on. In the event of hyperinflation, particularly, holding a high % of one's portfolio in stocks makes a lot of sense. If we're about to see massive currency deflation, then getting out of stocks is your best bet.

For the record, as a guy trained both in theology and economics, I love your random little economics posts. :-)

Very interesting and informative! Thanks, John.

I'm going to post a link to this at Ethics Forum here: http://college-ethics.blogspot.com

I believe you've had Democrat Alan Grayson on your blog before.

I think you would find this of interest:

Ed,
Sorry for the delay in responding to your comments. I got distracted and forgot. I think that in the near term the risk of inflation is fairly low. But that risk will rise as time passes.

In the intermediate and long term future I concur that we are heading for a nasty round of inflation. We have had a very loose monetary policy for far too long. You can not print money as fast as you can load paper and ink into the machines and run the kinds of deficits we are running for any length of time without long term consequences.

I doubt we will see hyper-inflation. But I do expect that we will see a nasty spike in interest rates and the CPI. 1970's style stagflation is a very real possibility. It's also worth noting that the 70's saw their share of bear market rallies as well. I chose to use the 1930's for my main example because the charts were clearer and the catastrophic consequences were much more readily observable.

As for where to put your money, that's an interesting question since we are living in a period of severe economic volatility. I have of late become something of a fan of the late libertarian economist Harry Browne and his theory of Permanent Portfolio. I favor a highly diversified portfolio that will weather and even profit from any future eventuality.

With frequent rebalancing the portfolio should produce a nice return over the long term. There is a mutual fund that actually invests using a very similar system called The Permanent Portfolio Fund (PRPFX). It is classed as a conservative allocation fund. PRPFX has been at the top of its class of funds for the last 10 years and although it was down last year (only its 4th down year out of 27) it beat the S&P 500 by about 30 points. Unlike most mutual funds that gave up a decades worth of gains last fall PRPFX is still up with an annualized return of about 7% over the last decade. Not bad all things said.