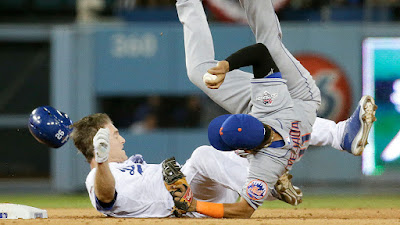 That wasn’t a slide into a 2nd base (unless Utley mistakenly thought 2nd base was somewhere in the outfield). It was a missile aimed at Tejada with the objective of taking him out by any means necessary. Mission accomplished with the added benefit of a broken leg. Even worse was the way the play was called. Utley never touched the damn base before or after the slide. He never came close to it. It was the worst blown call I’ve seen since the umpire robbed Armando Gallaraga of a perfect game back in 2010.
Posted by John (Ad Orientem) at 9:30 PM