LGBT ‘Catholic’ groups: If Pope can reverse Church teaching on death penalty, why not homosexuality? 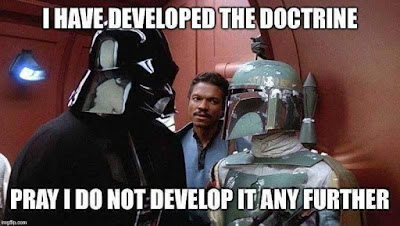 Now who didn't see this coming?

Of course this is the whole point. Bergoglio's obvious intention (besides distracting everyone from the increasingly obvious habit of appointing to positions of influence men who have obfuscated and abetted the sexual depravity of the hierarchy) is simply to undermine dogma across the board.

The death penalty is one of the Church's highly nuanced teachings on issues of human life and dignity. I don't know of any serious (small "o") orthodox Christian thinker who feels that recourse to the death penalty is "just" in most developed societies in the present age, but clearly many are willing to defend the dogmatic underpinnings of capital punishment as a sound practice depending on circumstances of time, government, and pragmatism.

By highlighting an area where "conservatives" or "traditionalists" will point to "circumstances of time, government, and pragmatism," Bergoglio has targeted every dogma which he would like to revise under those premises. I doubt very much whether he truly desires an end to the death penalty. He desires, rather, to paint the orthodox faithful as hypocritical and inconsistent.

"Ah, you see, the death penalty is against Catholic teaching... it's right there in the Catechism! I guess if we let local communities make local determinations about the death penalty we'll just have to let them do the same with respect to homosexual unions, abortion, ordination of women, celebration of the mass, intercommunion between Christian sects," and so on.

Regardless of one's stance on the papacy itself (I'm Catholic but our gracious host on this blog is Orthodox), I'm sure we all agree that an obvious heretic in the Chair of St. Peter is bad for Christianity altogether. It's high time to pray for the man's death, rather than his conversion.

I don't know of any serious (small "o") orthodox Christian thinker who feels that recourse to the death penalty is "just" in most developed societies in the present age,

Which is how you arrive at this straw man:

By highlighting an area where "conservatives" or "traditionalists" will point to "circumstances of time, government, and pragmatism,"

I think you and I are in agreement and I just wasn't clear enough in how I phrased things. Bergoglio knows damn well that the majority of the developed world has already rejected capital punishment. It's explicitly abolished in 105 nations, and most of those are nations with an overwhelming Christian history, and the abolition of capital punishment has often been supported by the faithful in those lands. (Many dozens of other nations have also effectively abolished it, by not making recourse to it.)

The point I was making about orthodox Christian thinkers is that, with the current world order as it is, Christians have led the fight to argue that life imprisonment is more "just" than death and that developed nations have the resources to offer life over death even to the most heinous criminals. I wasn't "begging the question," I was trying to highlight that Christians have largely rejected the application of the death penalty... without actually rejecting the dogmatic foundations that permit its use. I still maintain that most orthodox Christian thinkers have rejected the actual application of the death penalty in today's world, even those who support the (clear) teaching that it may be permitted.

Bergoglio, however, is making his usual attempt to conflate the application of "doctrine" with "pastoral practice," his typical nefarious quibble. By "developing doctrine," he's resting behind what Christians have overwhelmingly concluded to be "just" (abolishing capital punishment), in order to challenge a formal Christian dogma (that states may make recourse to the death penalty). So my "straw man," as you called it, is simply what I think he's trying to do. He knows that conservative and traditional bishops, priests, theologians, and faithful will argue against his "developed" doctrine, and they'll argue that circumstances of time, government, and pragmatism permit the death penalty under Christian dogma... which is entirely true! What's "just" may vary according to circumstance, but what's "true" does not.

By extension, though, Bergoglio will almost certainly try to turn the logic back around on his detractors. "Oh, well I say the death penalty is wrong, and what I say is formal Catholic teaching... see, it's there in the Catechism! You say 'It's not always wrong, but we have to look at time and circumstances.' Therefore, I guess we just have to look at time and circumstances to judge every doctrine by, and we need to accommodate every whim of the age! Roma locuta est."

You're completely right this this type of thinking is logically fallacious... that's why I think Bergoglio is dangerous not just for the Roman Catholic Church but for Christianity generally.