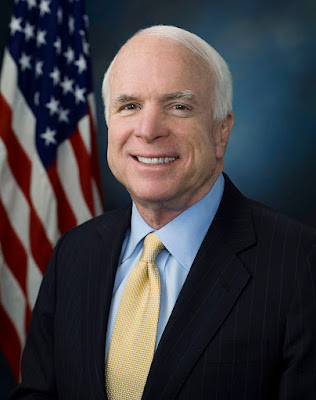 The last Republican presidential candidate that I voted for. He was imperfect, and his interventionist foreign policy tendencies were dreadful. But he was the last of the old breed of Washington pols who had tremendous bipartisan stature and who was not afraid to buck his own party, or president, when he felt obliged to do so.
Posted by John (Ad Orientem) at 8:48 PM

Eternal memory. He was a bit unstable, like most of us, but he had essential decency. I did used to think he would be a problematic president, especially with his temper, but that was before the bar was lowered, buried really, in 2016.

I mean, God rest his soul but, "Memory Eternal?"

Was he anything other than a nominal Presbyterian? I don't think he was religious at all.

He was among the group of actual influence-wielding people who almost destroyed Christianity in the Middle East, so there is no doubt he is in need of our prayers.

I did used to think he would be a problematic president, especially with his temper, but that was before the bar was lowered, buried really, in 2016.

LOL. I have no doubt either McCain in 2008 or Hillary in 2016 would have us in theater-wide warfare with a dry-foot/dry-foot immigration policy at home.

November 2016 was the future you chose. Conservatism Inc. did nothing while the Left took over every single institution, flipped the demographics from 88% Anglo-European to 64% and cratering in one lifetime, and then joined in a spirit of McCainian "bipartisanship" to bail out the rich and prevent them from becoming poor.

So several million people who stayed home through McCain and Romney came out to vote for a brash, twice-divorced loudmouth who hates their enemies while you voted for Muh Prince Apples.

I am troubled (actually, terrified) that Mr. McCain went to his death intentionally holding grudges and withholding forgiveness. I am at pains to find any witness in the Church which even suggests that one may withhold forgiveness yet expect forgiveness from God.

I don't like to make derogatory remarks about the dead, even him, RIP McCain.