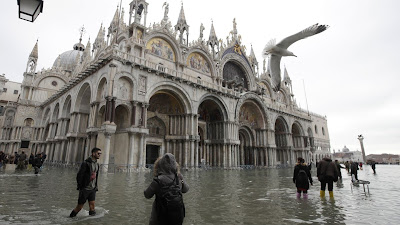 The historic squares of Venice were left deep underwater on Wednesday after most of the tourist mecca was inundated by the second-highest levels of flooding ever recorded, sending water into the historic basilica as more bad weather is in the forecast.

The high tide peaked at 74 inches late Tuesday, just short of the 76 inches set during record flooding of 1966. That meant more than 85 percent of the city was flooded, with water overtaking the famed St. Mark's Basilica, raising new concerns over damage to the mosaics and other artworks.

"Venice is on its knees," Mayor Luigi Brugnaro said on Twitter. "St. Mark's Basilica has sustained serious damage like the entire city and its islands.

The city is sinking and will eventually be abandoned. They need to figure out which buildings they want to save, dismantle them and re-assemble them elsewhere.