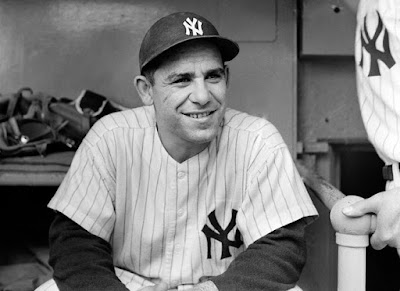 Yogi Berra, one of baseball’s greatest catchers and characters, who as a player was a mainstay of 10 Yankee championship teams and as a manager led both the Yankees and Mets to the World Series — but who may be more widely known as an ungainly but lovable cultural figure, inspiring a cartoon character and issuing a seemingly limitless supply of unwittingly witty epigrams known as Yogi-isms — died Tuesday. He was 90.

His death was reported by the Yankees and by the Yogi Berra Museum and Learning Center Museum in Little Falls, N.J. Before moving to an assisted living facility in nearby West Caldwell, in 2012, Berra had lived for many years in neighboring Montclair.

"an assisted living facility", also known as a pre-funeral home (a la pre-school).