The New York Times: Deep in the Carpathians, Painted Parables 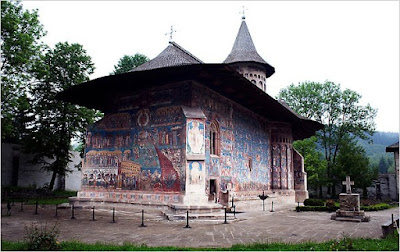 The painted church at the Monastery of Voronet, in the Bucovina region of Romania, dates back to 1488, and the reign of Stephen the Great.

WHEN the Moldavian prince Stephen the Great won his first decisive victory against the Turks five and a quarter centuries ago, he decided to mark the occasion with a grand monastery and adorn its walls with the colorful work of artisans of the day. With his second victory came another monastery. With the third, yet another.

The result of his victories — 46 in all — was an unprecedented building spree within the densely forested terrain of the Bucovina region in modern Romania. The tradition was embraced by his son and successor, Petru Rares, and their vassals. Many of the mural-covered monasteries and churches survive, nestled in a valley, having withstood the withering summer sun and winter winds for centuries. What started out as Stephen the Great’s war trophies have become some of the world’s most stunning works of art.

They exist now as the present-day Monastery of Voronet, about three miles south of the Romanian village of Gura Humorului, and its sister sanctuaries, scattered within a radius of some 25 miles and collectively recognized as Unesco World Heritage sites.