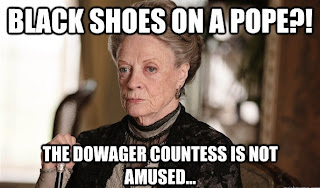 When Pope Francis was elected, we didn't know much about him. When Pope Benedict was elected Pope, we knew exactly who he was. Pope Benedict had scores of published books and he had a been a visible and known prelate at the Congregation for the Doctrine of the Faith. Benedict was in many ways the right hand man of John Paul II and we knew what to expect.

Pope Francis is entirely unknown to most of us. As a result, most folks have had to rely on only one source of information for the past week or so: photographs. Hence, most of the controversy over Pope Francis has boiled over "what is the Pope wearing or not wearing?"

As I was thinking about this, I realized that Pope Francis's wardrobe and customs have created as much excitement as a Downton Abbey episode! Black shoes on a Pope? What would the Dowager Countess say? My goodness!

For those that have never seen Downton Abbey, it's essentially a BBC drama centered on the "scandals" of an English Earl and his family as they wrestle with wearing black tie at dinner instead of white tie and whether noble blood necessitates a valet to help one dress. Other profound controversies include whether the Irish son-in-law should wear a morning suit, and which servant gets to wear the livery of a footman. As you can tell, it is an epic mini-series of deep philosophical distinctions...

An amusing read with a sound point. Read the rest here.
Posted by John (Ad Orientem) at 1:26 PM