Latest on the SSPX & the Tridentine Indult... 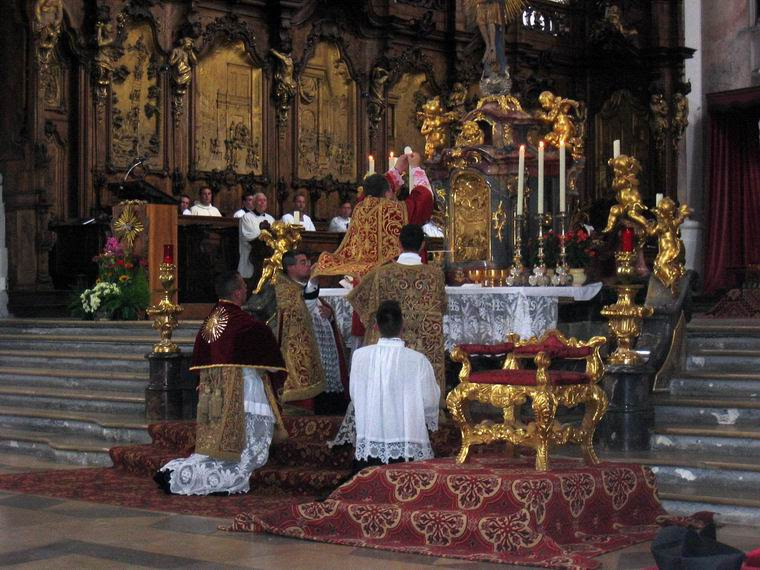 (Click on image for larger view)
The New Liturgical Movement posted a clip from CWNews on the latest rumors emanating from Rome. As I stated a while back, the indult is almost certainly coming since it is a non-negotiable condition for normalizing relations with the SSPX which +Benedict XVI urgently desires. To those who expected this to be done the day after +Benedict's election I can only say you do not know +Benedict. This is a man who does not act rashly. Even so, the pace of events in the Vatican has been at something near light speed compared to the usual glacial pace of that corner of the world. I append the news clip below.

Apr. 21 (CWNews.com) - During a closed-door meeting on March 23 with the College of Cardinals, Pope Benedict XVI indicated that he plans a move to allow broader use of the old Latin Mass. The exact nature of the Pope's move, and its timing, remain matters of intense speculation.

As the French bishops concluded their annual assembly on April 7, Cardinal Jean-Pierre Ricard revealed that the Pope is expected to issue directives "in the coming weeks or months" that would appeal to traditionalist Catholics. The French cardinal confirmed that Pope Benedict is particularly anxious to find ways of restoring normal relations with the Society of St. Pius X (SSPX).

As prefect of the Congregation for the Doctrine of the Faith, then-Cardinal Ratzinger was closely involved in the efforts-- ultimately fruitless-- to avoid a breach between the late Archbishop Marcel Lefebvre's traditionalist group and the Vatican. In June 1988 the archbishop consecrated four bishops, against explicit orders from the Holy See, and the Vatican responded with a decree of excommunication.

Since that time the Vatican has maintained contact with the breakaway traditionalist group, looking toward a restoration of normal ecclesiastical ties. Talks between SSPX leaders and Vatican officials became more intense in the Jubilee Year 2000, at the explicit request of Pope John Paul II; the efforts have been stepped up again under Pope Benedict XVI. The new Pope has always been perceived by traditionalist Catholics as a sympathetic friend, and his private meeting last August with Bishop Bernard Fellay, the SSPX superior, was seen as an important step toward reconciliation.

For several weeks, at the Pope's request, Vatican officials have been discussing proposals for the reintegration of the SSPX into the normal structure of the Church. After the March 23 meeting of the world's cardinals, Cardinal Dario Castrillon Hoyos-- who as president of the Ecclesia Dei commission has been the Vatican's leading figure in talks with traditionalists-- said that the Church would welcome back the Lefebvrists "with open arms." The day's discussions, the Colombian cardinal said, had involved a search for "the best formula" for a canonical resolution of the split.

For the past month, a recurrent rumor at the Vatican has been that Pope Benedict will issue a motu proprio allowing the universal use of the 1962 Roman Missal. (The use of the old rite is currently allowed only with the approval of the diocesan bishop, under the terms of the 1988 papal directive Ecclesia Dei, from which the Vatican commission draws its name.) Reports have also suggested that the Vatican is prepared to lift the decrees of excommunication against the SSPX leaders. And there have been reports that the Holy See could create a new ecclesiastical unit, an apostolic administration of personal prelature, for the pastoral care of traditionalist Catholics.

However both the Vatican and the Lefebvrist group have listed conditions that must be met before reconciliation is possible. The Vatican insists that the SSPX leaders manifest their repentance for the break with Rome, and accept the validity of Vatican II documents. The SSPX demands a Vatican move allowing free worldwide use of the old Latin Mass, and the freedom to question the content of some Vatican II documents.

A motu proprio allowing unrestricted use of the Tridentine rite would fulfill the first SSPX request. Last December, in a pre-Christmas address to the Roman Curia, Pope Benedict emphasized that the documents of Vatican II must be interpreted in the light of Church tradition-- a statement that went a long way toward satisfying the other traditionalist demand.

While Pope Benedict is clearly hoping to restore full communion, it remains unclear how many members of the SSPX are equally anxious to repair ties with Rome. Some Lefebvrists have indicated a strong desire to resolve their disagreements with the Holy See; others, such as Bishop Richard Williamson, have suggested that there is no realistic prospect for agreement with a Vatican leadership they regard as thoroughly corrupt. Bishop Fellay-- probably hoping to hold the different factions together, as the SSPX moves toward a July leadership vote-- has allowed that the Vatican seems anxious to move toward reconciliation faster than his own followers are ready to go.