VILNIUS, Lithuania (AP) — Russia’s tech workers are looking for safer and more secure professional pastures.
By one estimate, up to 70,000 computer specialists, spooked by a sudden frost in the business and political climate, have bolted the country since Russia invaded Ukraine five weeks ago. Many more are expected to follow.
For some countries, Russia’s loss is being seen as their potential gain and an opportunity to bring fresh expertise to their own high-tech industries.
Russian President Vladimir Putin has noticed the brain drain even in the throes of a war that, according to the U.N. refugee agency, has caused more than 4 million people to flee Ukraine and displaced millions more within the country.
This week, Putin reacted to the exodus of tech professionals by approving legislation to eliminate income taxes between now and 2024 for individuals who work for information technology companies.
Some people in the vast new pool of high-tech exiles say they are in no rush to return home. An elite crowd furnished with European Union visas has relocated to Poland or the Baltic nations of Latvia and Lithuania.
A larger contingent has fallen back on countries where Russians do not need visas: Armenia, Georgia and the former Soviet republics in Central Asia. In normal times, millions of less-skilled laborers emigrate from those economically shaky countries to comparatively more prosperous Russia.
Anastasia, a 24-year-old freelance computer systems analyst from the Siberian city of Novosibirsk, chose Kyrgyzstan, where her husband has family.
“When we heard about the war on (Feb. 24), we thought it was probably time to leave, but that we might wait and see. On February 25, we bought our tickets and left,” Anastasia said. “There wasn’t much thinking to do.”
Like all the Russian workers contacted for this story, Anastasia asked to remain anonymous. Moscow was cracking down on dissent even before the invasion of Ukraine, and people living outside Russia still fear reprisals.
“As long as I can remember, there has always been fear around expressing one’s own views in Russia,” Anastasia said, adding that the war and “the background noise of patriotism” made the environment even more forbidding. “I left one day before they began searching and interrogating people at the border.”
The scale of the apparent brain drain was laid bare last week by Sergei Plugotarenko, the head of the Russian Association for Electronic Communications, an industry lobbying group.
“The first wave – 50,000-70,000 people – has already left,” Plugotarenko told a parliamentary committee.
Only the high cost of flights out of the country prevented an even larger mass exit. Another 100,000 tech workers nevertheless might leave Russia in April, Plugotarenko predicted.
Read the rest here.
Posted by John (Ad Orientem) at 11:41 AM No comments:

Hours and Divine Liturgy, Sunday of the Holy Cross

The Kremlin again raised the spectre of the use of nuclear weapons in the war with Ukraine as Russian forces struggled to hold a key city in the south of the country.
Dmitry Medvedev, a former Russian president who is deputy chairman of the country’s security council, said Moscow could strike against an enemy that only used conventional weapons while Vladimir Putin’s defence minster claimed nuclear “readiness” was a priority.
The comments on Saturday prompted Ukraine’s president, Volodymyr Zelenskiy, in an appearance by video link at Qatar’s Doha Forum to warn that Moscow was a direct threat to the world.
“Russia is deliberating bragging they can destroy with nuclear weapons, not only a certain country but the entire planet,” Zelenskiy said.
Putin established the nuclear threat at the start of the war, warning that western intervention would reap “consequences you have never seen”.
Western officials have said the threats may be simply an attempt to divert attention from the failure of Putin’s forces to secure a swift occupation of the Ukrainian capital, Kyiv, and to make advances in other key areas of the country.
An adviser to Ukraine’s defence ministry, Markian Lubkivskyi, claimed on Saturday that Russia would soon lose control of the southern city of Kherson, the first major centre to fall to the Kremlin since the war began on 24 February.
He said: “I believe that today the city will be fully under the control of Ukrainian armed forces. We have finished in the last two days the operation in the Kyiv region so other armed forces are now focused on the southern part trying to get free Kherson and some other Ukrainian cities.”
Russia has approximately 6,000 nuclear warheads – the largest stockpile of nuclear weapons in the world. In an interview on Saturday, Medvedev said Russia’s nuclear doctrine did not require an enemy state to use such weapons first.
Read the rest here.
Posted by John (Ad Orientem) at 11:20 AM No comments:

Ukrainians are being kidnapped

Multiple sources are reporting that the Russian Army is forcibly deporting thousands of Ukrainian civilians to Russia.

A Memorandum on the Next Conclave Is Circulating Among the Cardinals

Lloyds and DNV withdraw Certification from all Russian Ships

These are two of the world's largest entities that certify ocean going vessels, including super yachts, for insurance purposes. What this means, is that any Russian ships certified by either of these entities may now be operating without insurance. This is a bit complicated as there are other certifiers, but these are the two used by the vast majority of ships and luxury yachts. In order to enter ports and refuel, most ships are required to show evidence of insurance. I'm not certain if this applies to all vessels owned by Russian entities or just Russian flagged ships. But this has the potential to be highly disruptive.

Update: At least one source is suggesting this is primarily being done to vessels owned by sanctioned persons, which would mostly limit it to luxury super yachts owned by Putin's cronies. More than a few of which have suddenly left their ports and turned off their satellite tracking beacons, which is against maritime law.

The Economic Consequences of Putin's War

The big western brands showed Vladimir Putin how to do it. While the Kremlin’s army was getting bogged down in Ukraine, Coca-Cola and Starbucks lost no time in closing their doors to Russian customers.
But the most emblematic move of all came from McDonald’s, which has shut all 850 of its outlets in Russia. The availability of Big Macs in the Soviet Union was seen in 1990 as evidence that the west’s old cold war foe was turning its back on communism, but the past fortnight has rekindled memories of the bad old days. There were queues outside McDonald’s when it first opened in Moscow. Last week, Russians queued for one last burger before the pull-out began.
One of Putin’s predecessors in the Kremlin – Lenin – once said there were decades when nothing happens and weeks when decades happen, and that’s true of the period since Russian troops moved across the border into Ukraine on 24 February.
It is not just that Russia faces a brutal recession. It is the shattering of the idea of a seamless post-cold-war global economy. It is the return to days of higher defence spending in the west. It is the possibility that governments may backpedal on their net zero carbon pledges.
“Putin has created his own worst nightmare,” says Mohamed El-Erian, chief economist at Allianz and president of Queens’ College, Cambridge. “He has united the west in a way it hasn’t been for a long time; he has been the catalyst for arms to Ukraine on a large scale; he has changed Germany’s approach to military spending; and he has brought the Russian economy to its knees. It is incredible.”
Freezing the bulk of Russia’s reserves has meant the central bank has struggled to shore up the rouble, which has plummeted by a third on the currency markets. Capital controls have been introduced, interest rates have more than doubled, and annual inflation is heading for 20%. The stock market has been closed and financial markets fear Moscow may default on a sovereign debt repayment later this week.
Read the rest here.
Posted by John (Ad Orientem) at 7:17 PM 2 comments:

On the eve of the Great Fast 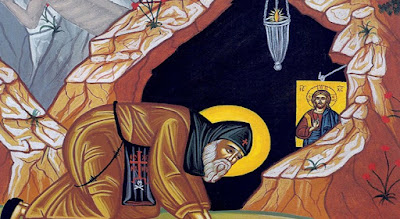 I beg forgiveness for any injury I may have caused, especially through this blog. No blogging until after Clean Wednesday.

In overnight trading as of this posting...

Oil futures are at $126/barrel of West Texas Crude. That's the highest level since 2008.

Bitcoin, after briefly rising to $43,000 as Russians were buying anything where they thought they could stash cash not subject to sanction or crippling inflation has retreated to a little over $38,000.

US stock futures are currently down about 1.2%.

Finally something amusing from Ukraine

I don't think the civilized world has cheered this loudly for a country under attack by a powerful predatory neighbor since Belgium in 1914.

Russia Prepares Law Against "Fake" News on War in Ukraine

The law, expected to be voted on tomorrow, makes it a criminal offense punishable by 15 years in prison to spread false news or reports on the war in Ukraine. The last two independent media outlets in Russia have both announced they are suspending operations.