Metropolitan Amfilohije (Radović), the primate of the Serbian Orthodox Church in Montenegro has reposed.

Why I’m Not A Universalist

Well worth a read.

In the spirit of the moment here are a few questions for history enthusiasts. See how many you can answer before looking them up or checking the comments. I will post the answers tomorrow.

* Who was the last president elected by the US House of Representatives?

* Excluding those who died in office, which presidents did not attend the inauguration of their successors?

* Two men ran against each other for the office of Vice President. The Republican won and the Democrat lost. Both would go on to become President of the United States. Who were they?

* Who was the last third party candidate to actually win one or more states in the Electoral College?

* Who was the only president to formally join a church while in office, being baptized, confirmed, and receiving Communion all in the same day?

On Monday, October 19, 2020, His Beatitude Metropolitan Theodosius (Lazor), former Archbishop of Washington, Metropolitan of All-America and Canada, fell asleep in his Lord in Canonsburg, after an extended illness. He was the Primate of the Orthodox Church in America from 1977 until his retirement in 2002.
Read the rest here.
Funeral services here.
Posted by John (Ad Orientem) at 12:42 PM No comments:

A carpet with coca leaves, seeds and bottles served as “altar”. Many bishops participated in the pagan ritual in chasubles and miter.

Among them was the Apostolic Nuncio to Chile, Archbishop Ivo Scapolo, who is now Nuncio to Portugal.

Also present was modernist Santiago Cardinal Ezzati, 78, whom Francis first left in place but then abandoned in March 2019 due to the abuse hoax.

Unbelievable. The Catholic Church is rapidly sliding into open apostasy.

ROME — In a documentary that premiered Wednesday in Rome, Pope Francis called for the passage of civil union laws for same-sex couples, departing from the position of the Vatican’s doctrinal office and the pope’s predecessors on the issue.
The remarks came amid a portion of the documentary that reflected on pastoral care for those who identify as LGBT.
“Homosexuals have a right to be a part of the family. They’re children of God and have a right to a family. Nobody should be thrown out, or be made miserable because of it,” Pope Francis said in the film, of his approach to pastoral care.
Read the rest here.
HT: Dr Tighe and a couple of blog readers who kindly alerted me to this shocking development.
Posted by John (Ad Orientem) at 11:58 AM 3 comments:

Concerns over the Catholic Church in Germany grow

VATICAN CITY — As reports emerged recently of Pope Francis’ “dramatic concern” about the state of the Catholic Church in Germany and news that he received Germany’s apostolic nuncio for private talks on Monday, the country’s bishops pressed ahead on their goal of shared Communion with Protestants despite strong objections from the Vatican.

The leaders of both churches said their intercommunion proposal “still needs to be clarified” even though the Congregation for the Doctrine of the Faith said last month that differences in the Catholic and Protestant understanding of the Eucharist were “still so grave” that they ruled out attendance at each other’s services.

The increasing divergence between Rome and the German bishops, amplified by the ongoing Synodal Path — a two-year reform program of German bishops and laity that questions some of the Church’s established teaching on faith and morals — demonstrates the real dangers of the Church in Germany one day breaking with Rome.

In September, a leading German prelate raised the possibility of schism for the first time.

Such a prospect is something Pope Francis appears increasingly concerned about, despite his own efforts to grant more autonomy to bishops’ conferences on doctrinal matters which critics have warned has sowed the seeds of a kind of “doctrinal anarchy” in the Church.

A last look at summer 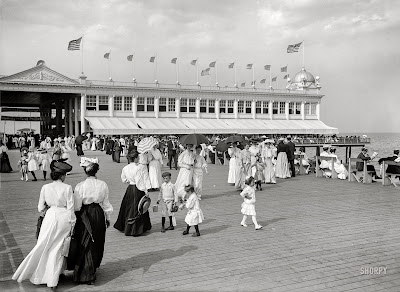 Full Sized Image may be found here.
Posted by John (Ad Orientem) at 10:59 PM No comments:

Negative interest rates could spell the end of free bank accounts, experts warned after the Bank of England gave its clearest indication yet that the controversial policy could be introduced.

The Bank has written to UK lenders' chief executives asking them to set out their readiness for negative rates, raising the prospect of an unprecedented move below zero as the recovery begins to slow.

It could trigger massive losses for lenders. According to analysts and grandees, in an extreme scenario banks could be forced to start charging millions of customers a monthly fee.

Sir Philip Hampton, who was chairman of taxpayer-backed Royal Bank of Scotland at the height of the financial crisis, said: "In the case where negative rates are significant and prolonged, and are charged on current accounts of ordinary earners, I think there’s likely to be a strong customer reaction and pressure to make the revenues fit the costs with more transparency. That probably means fees.

"The alternative could be negative interest rates on bigger deposits. That mainly hits the better off who can usually afford it but also pensioners and other savers. But these events often lead to something fairly radical."

Threadneedle Street has already slashed rates to an all-time low of 0.1pc, wrecking banks' profits and landing savers with a return of close to zero on their deposits.

Something is going on among the Greeks

Not sure what it's all about. But what is being publicly reported can be found here.

“By choosing to privilege a novel constitutional right [to same-sex marriage] over the religious liberty interests explicitly protected in the First Amendment, and by doing so undemocratically, the Court has created a problem that only it can fix,” the justices wrote in an opinion published Monday.

“Until then, Obergefell will continue to have ‘ruinous consequences for religious liberty,’” they warned.

In their opinion, which accompanied the Court’s denial of a writ of certiorari in the case Davis v. Ermold, Thomas and Alito said that the 2015 landmark decision pitted same-sex marrriage against religious liberty.

In the case of former county clerk Kim Davis of Kentucky, who in 2015 made headlines for refusing to issue marriage licenses to same-sex couples, Thomas and Alito joined the court in denying her petition for a writ of certiorari, or a review of her case, on the first day of the court’s fall term.

Davis was sued for not issuing marriage licenses after the Obergefell ruling declared a right to same-sex marriage. The Sixth Circuit appeals court in 2019 ruled that she was not protected from qualified immunity, and thus could be held personally liable for infringing on the constitutional rights to marriage of same-sex couples.

In a statement accompanying the denial of certiorari, Alito and Thomas said Davis’ petition “does not cleanly present” the issues at hand in the Obergefell ruling. However, they sharply criticized the 2015 ruling for posing serious and unnecessary challenges to those religiously believing marriage is between one man and one woman.

Multiple and highly reputable polls are showing Biden leading Trump by double digits nationally and by numbers outside the margin of error in most swing states. The most conservative polls show a lead of around 8% for Biden with others showing leads of 12-16%. We are now within the four week window of the election and team Trump is running out of time to climb out of their hole. No presidential candidate has enjoyed this kind of lead at this stage of an election since 1984 and no incumbent president trailing this badly has ever been reelected for as long as we have had reliable polling data.

Obviously this is very close to the only topic in the news right now and I have little to add to the endless analysis. I wish Mr. Trump a speedy recovery.

Beyond which, far from being surprised by his illness, I think it remarkable that he avoided infection for as long as he did, given his open disdain for most of the medical community's advice intended to reduce risk of contracting or spreading the virus. It was all but inevitable that this would end badly, and so it has. The irony is that the president's determination to attend and host events where masks and social distancing were not only not required, but discouraged, has now resulted in a wave of infections among prominent Republicans.

I noticed on a somewhat fringy rightwing forum last night, that conspiracy theories were spreading that this was some kind of biological warfare attack by Democrats on the GOP. Given the level of damage inflicted one could almost forgive such lunacy. But as is so often the case; the fault here rests entirely with  President Trump's reckless behavior.