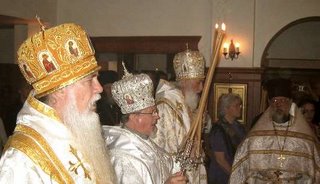 Bp. +Tikhon & Met. +Herman
Those who have been following the somewhat unfortunate events in the OCA over the last several months may not be terribly surprised by this development. The very public differences between +Tikhon and Met. +Herman probably moved this along. It is also worth noting that the minutes confirmed that Bp. Tikhon will forward the funds owed by the Diocese of the West to the central administration within the next week or so. They had been held back in protest of Met. +Herman's actions in response to the recent scandals. No mention of the ongoing audits or other investigations were contained in the minutes, which were rather vague, to put it kindly. Still this is an important development in the affairs of the church.. From the minutes of the meeting of the Synod of Bishops of the OCA posted on their website:

HEARD: After a statement about the overall nature of his life and service, about his health and recent service, Bishop TIKHON of San Francisco, Los Angeles and the West, reflecting on the content of a recent meeting with his Deans, announced his retirement, effective 14 November, 2006. This decision had been taken prior to the most recent meeting of the Lesser Synod.