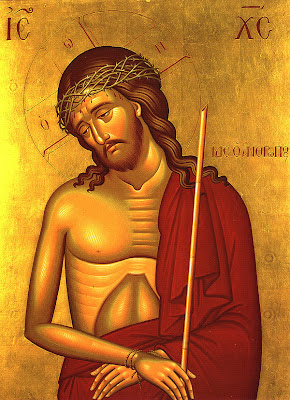 Lent has ended. However the Great Fast continues. It is now entering its last week. As we journey into Holy Week Orthodox Christians are preparing for the joy of Holy Pascha (Easter). It is a period of intense spirituality which is reflected in the large number of services held during the week.

The first part of Holy Week presents us with an array of themes based chiefly on the last day's of Jesus' earthly life. "The story of the Passion, as told and recorded by the Evangelists, is preceded by a series of incidents located in Jerusalem and a collection of parables, sayings and discourses centered on Jesus' divine sonship, the Kingdom of God, the Parousia, and Jesus' castigation of the hypocrisy and dark motives of the religious leaders."

The Matins Services (Orthros in Greek Churches) of Holy Monday, Tuesday and Wednesday is called the Service of the Bridegroom, and gets its name from the central figure in the well-known parable of the Ten Virgins (Matthew 25.1-13). "The title Bridegroom suggests the intimacy of love. It is not without significance that the Kingdom of God is compared to a bridal feast and a bridal chamber. The Christ of the Passion is the Divine Bridegroom of the Church. The imagery connotes the final union of the Lover and the beloved. The title Bridegroom also suggest the Parousia.

Each day of Holy Week has its own particular theme. The theme of Monday is that of the barren fig tree (Matthew 21: 18-20) which yields no fruit and is condemned. On Tuesday the theme is on the vigilance of the wise virgins (Matthew 25: 1-13) who, unlike their foolish sisters, were ready when the Lord came to them. On Wednesday the focus is on the sinful woman (Matthew 26: 6-13) who repents. Great emphasis is made in the liturgical services to compare the woman, a sinful harlot who is saved, to Judas, a chosen apostle who is lost. The one gives her wealth to Christ and kisses his feet; the other betrays Christ for money with a kiss.

Also on Holy Wednesday there is in many parishes a service of Holy Unction.

The Sacrament of Holy Unction is a sacrament of faith (James 5:14-15). It is meant for any sick person and is always celebrated in the hope that it will bring healing. While this certainly is the desired effect, it is not the indispensable condition of the Sacrament. The essential purpose of the sacrament is to allow the person to share in the victory of Christ and to raise him into the realm of God's Kingdom. It communicates spiritual power so that the trials of sickness may be borne with courage, hope and fortitude.

The solemn celebration of the Holy Unction on Great Wednesday serves to remind us of Christ's power to forgive and liberate the conscience of personal and collective sin. Thus, it helps emphasize the glorious expectation of Pascha: the resurrection, redemption and sanctification of all life. In addition, it helps us to realize how fragile human life really is and how dependent we are on God; if our life is to have any true meaning.

The service of Holy Thursday morning is dedicated exclusively to the Passover Supper which Christ celebrated with his twelve apostles. The main theme of the day is the meal itself at which Christ commanded that the Passover of the New Covenant is to be eaten in remembrance of himself, of his body broken and his blood shed for the remission of sins. In addition, the betrayal of Judas and Christ's washing of the disciples' feet are also central to the liturgical commemoration of the day. In cathedral churches it is the custom for the bishop, to re-enact the footwashing in a special ceremony following the Divine Liturgy.

The liturgical celebration of the Lord's Supper on Holy Thursday is not merely the annual remembrance of the “institution” of the sacrament of Holy Communion. The very event of the Passover meal itself was not merely the last-minute action by the Lord to “institute” the central sacrament of the Christian Faith before his passion and death. On the contrary, the entire mission of Christ, and indeed the very purpose for the creation of the world in the first place, is so that God's beloved creature, made in his own divine image and likeness, could be in the most intimate communion with Him for eternity, sitting at the table with Him, eating and drinking in His unending kingdom.

In a real sense, therefore, it is true to say that the body broken and the blood spilled spoken of by Christ at his last supper with the disciples was not merely an anticipation and preview of what was yet to come. In fact it was that what was yet to come - the cross, the tomb, the resurrection on the third day, the ascension into heaven - came to pass precisely so that men could be blessed by God to be in holy communion with Him forever, eating and drinking at the mystical table of His kingdom of which there will be no end.

The evening service of Great and Holy Thursday is that of the Passion of Christ and is composed of the reading of the Twelve Gospels. This is a profoundly moving service that reminds us of the terrible suffering that Christ endured for the salvation of the world. It is also a fairly long service even by Orthodox standards. the twelve readings are... 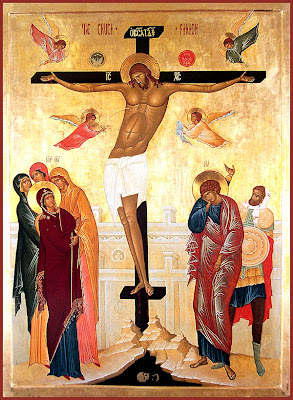 Each of the four Hours bears a numerical name, derived from one of the major daylight hours or intervals of the day as they were known in antiquity: the First (corresponding to sunrise); the Third (midmorning or 9 a.m.); the Sixth (noonday); and the Ninth (mid-afternoon or 3 p.m.).

Each Hour has a particular theme, and sometimes even a sub-theme, based upon some aspects of the Christ-event and salvation history. The general themes of the Hours are the coming of Christ, the true light (First); the descent of the Holy Spirit (Third); the passion and crucifixion of Christ (Sixth); the death and burial of Christ (Ninth).

The central prayer of each Hour is the Lord’s Prayer. In addition, each Hour has a set of three Psalms, hymns, a common prayer (Christ our God, worshiped and glorified . . .) and a distinctive prayer for the Hour.

A radical change in the Service of the Hours, however, occurs on Great Friday. The content is altered and expanded with a set of troparia and Scripture Readings (Prophecy, Epistle, and Gospel) for each Hour. In addition, two of the three Psalms in each of the Hours are replaced with Psalms that reflect themes of Great Friday. While the stable-fixed Psalm of the service reflects the theme of the particular Hour, the variable Psalms reflect the theme of the day. In their expanded version these Hours are called The Great Hours or the Royal Hours. 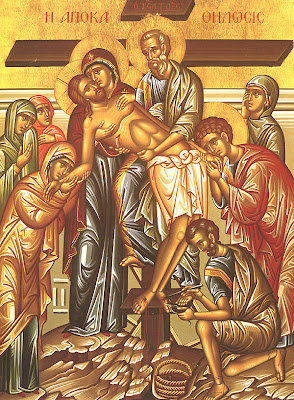 On the afternoon of Good Friday, we conduct the service of the Great Vespers with great solemnity. This Vesper service concludes the remembrance of the events of the Lord's passion, and leads us towards watchful expectation as we contemplate the mystery of the Lord's descent into Hades, the theme of Great Saturday.

In popular language the Vesper Service of Great Friday is often called the Apokathelosis, a name derived from the liturgical reenactment of the deposition of Christ from the Cross. The service is characterized by two dramatic liturgical actions: The Deposition or Apokathelosis (literally the Un-nailing); and the Procession of the Epitaphios (the icon depicting the burial of Christ encased within a large embroidered cloth.) The aforementioned terms are the Greek terms. If someone is familiar with the Slavic feel free to drop me a line or post a comment.

In an evening service, called the Lamentations at the Tomb, the priest carries the Epitaphios, the painted or embroidered cloth representation of Christ, from the altar around the church before placing it in the Sepulcher, a bier symbolizing the Tomb of Christ. This procession, with the faithful carrying lighted candles, represents Christ's descent into Hades. 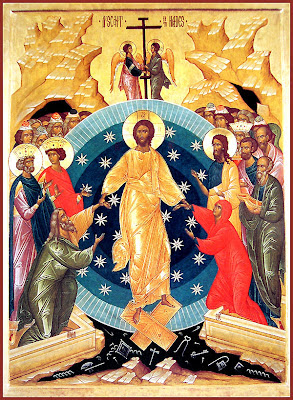 Vespers and the Liturgy of St. Basil are served with the first real resurrectional themes starting to show. The specific commemoration is the descent in Hades and the loosing of the bonds that held the souls of the departed. Many of the hymns for the service focus on this.

Great Saturday is also one of the most traditional dates of the year for the reception of converts. The receptions usually take place after the morning services so that the newly illumined can make their First Holy Communion at the Pascha Liturgy.

Most Orthodox Christians tend to take Holy Week quite seriously. A significant effort is usually made to attend as many of the services as individual circumstances will permit with an emphasis on the last three days. Fasting remains very important during this period. Even those who have been lax in the fast or disregarded it altogether usually make a special effort to keep it during Holy Week. Those who are strict in their fasting will eat as little as possible from sunset on Great Thursday until they break the fast after Communing at Pascha. Pascha is also the one day out of the year where All Orthodox Christians (not under some form of suspension) are really expected to receive Holy Communion. In some cultures reception of communion has become uncommon or even very rare. But even those who commune only once a year will do so at Pascha. Confession, if not recently done, is also commonly taken during Holy Week in preparation for the Feast of Feasts.
Posted by John (Ad Orientem) at 12:51 AM