Of Mad Men and the Three Martini Lunch 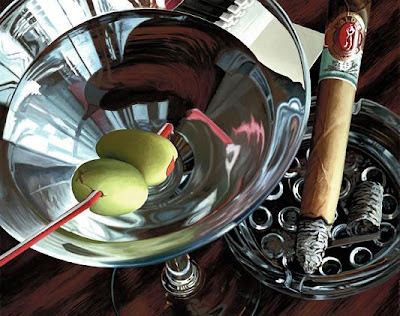 AMC is getting ready to roll out a new television series that is supposedly set in a high powered ad agency circa 1960. It’s called "Mad Men" and the previews suggest that it is going to give an unvarnished look at business and social life in that period. I have always had a bit of a weakness for period movies or television if they are good. This program might be one of the good ones.

Maybe I am starting to feel my age but while watching a program that gave a glimpse into the making of the series and the extraordinary efforts made by the producers and cast to be period correct, I got small chills. I suddenly realized that I can remember things like rotary telephones, a television that only got a few channels and you actually had get up from the couch to change the channel manually! I can remember a time before cell phones and blackberries, pagers and the internet. There were no microwaves until I was a teenager. And we were always worried about radiation poisoning. Bringing a weapon to school when I was a kid generally meant one of those bright orange plastic squirt guns. I could go on but I am sure you get the picture.

However, this series does not sound like it's intended to be a sort of Leave it to Beaver nostalgia trip for the close of the 1950's. The 1950's-60's was a period where a woman's place in business was generally limited to that of secretary or switchboard operator. It was also a period when what we would call sexual harassment today was not only accepted, it was fairly normative in many offices. People were open in their prejudices. Office politics was rough, even brutal. And all of this is going to be shown in the series.

OK, so maybe setting aside the crazy hairdos on the girls and super thin neckties ending about 3 inched above the belt on men this could be a sort of look in the mirror for a lot of us today. In fairness though, some things have mercifully changed since then. We can start with smoking.

I can see all of the various anti smoking groups throwing a HUGE fit over Mad Men out of fear that it will glamorize smoking. There is a lot of it in the show. But guess what. In the middle of the last century people smoked. I mean really smoked, like chimneys. They smoked at home, in the car, in their office, in the company lounge, in meetings, and of course in restaurants night clubs and that wonderful social nexus of the era, the cocktail bar (of which more shortly). I can still remember my mother setting out ashtrays whenever we had guests coming over (this was in the 70’s and 80’s). Polite people always asked if it was OK to smoke when visiting someone else’s house. And polite hosts always said “yes of course.” I don’t remember when my mother got rid of the ashtrays and people stopped asking if they could smoke in our house. It was probably after I joined the Navy. My grandfather was the only real smoker in the family other than my occasional fondness for a good cigar or pipe (rarely indulged these days). But that aspect of the show is pretty dead on.

The other social vice portrayed (that some people actually complain about missing) was the drinking. In those days people drank. A business man would often have a drink on arriving at the office. A few would make a point of not indulging before , but this was not altogether common. One would start a board meeting with drinks. Drinks would be offered to the boss if he entered your office or you were called to his (unless you were in trouble). Drinks were offered to clients and of course after a long day at work the boys (and girls) would get together and head to their favorite watering hole for the after work cocktail, or two or three.

Which brings up one of the great American social institutions now largely gone by. Back in the day when your boss could not text message you on your lunch break and when deals and business were often based on personal relationships rather than email correspondence, it was not uncommon for people to take a leisurely business lunch with friends or clients (who were often both). These could sometimes last well over the hour that is typically the high end lunch break for most working people today. One defining element of them was the lunch cocktail. The so called three martini lunch was a reference to the fact that one could until the mid 1980’s deduct business lunch expenses from your taxes including your drinks. Incredibly people really did go out and have three or more martinis over lunch. I have this from people who attended some of those lunches and lived to tell the tale.

Now consider if you will the ingredients in a martini. Some people today are tragically unfamiliar with this drink.

The basic martini recipe is

5 drops of dry vermouth (The dryer the better.)

And with apologies to James Bond a true martini is never shaken. It is stirred.

Take the above ingredients times three and you have over a pound of gin! Forget all the other social and business drinking that went on and just think about a lunch where you have three or more(!) martinis. I suspect I would need help getting back to my office. For that matter, I suspect I would need help finding my office. How American business did not just grind to a halt every day around with everyone getting totally blotto is beyond me. Perhaps it will be revealed in Mad Men.

The fast pace of modern life that is always on the run can be brutal. But at least our lungs and liver seem to have gotten the better end of the deal. In the meantime we can all sit back and take a glimpse at life in a simpler if perhaps more coarse time. Unless of course your boss texts you on your blackberry about that project in the middle of the show.

Well, I for one thought this was a great post. It brought back many memories of my grandparents and it helps me understand some of my parents' drinking habits. My mother would love your recipe for a martini, with one exception. She would say that you are a fanatic when it comes to the vermouth. Her idea of a martini is simply to have a bottle of vermouth near the glass. Perhaps, if one wanted to go all out, in her martini world, one would pour a little vermouth on a spoon and hold it over the drink, so that the vapors might blend. My mother, an ex Navy officer herself, would much agree with your dismissal of the shaken martini, she says such a drink is for a person of questionable morals. For every holiday we celebrate together, I give my mom the 1.75L bottle of Tanqueray. I am her favorite son. And though I am a person who probably has on average four or five servings of alcohol a day, it amazes me when I hear my grandfather speak of his drinking habits in the 50's. You are right to wonder how they got any work done. But they were a tougher lot, on the whole. I remember way back when reading Christopher Humphrey's book on the Inklings and discovering that most of the Inkling's meetings at the Eagle and the Child were held in the mornings. They then went to work, having often had a good number of drinks during their session. My opinion is that because they did not have TVs (Lewis even hated radio) their mental faculties could endure such strain.

My mother, an ex Navy officer herself, would much agree with your dismissal of the shaken martini, she says such a drink is for a person of questionable morals.