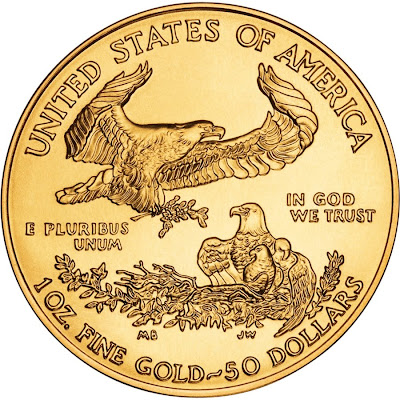 In the single greatest act of theft in American history Franklin D. Roosevelt abandons the Gold Standard and confiscates all privately owned coins and bullion...

On June 5, 1933, the United States went off the gold standard, a monetary system in which currency is backed by gold, when Congress enacted a joint resolution nullifying the right of creditors to demand payment in gold. The United States had been on a gold standard since 1879, except for an embargo on gold exports during World War I, but bank failures during the Great Depression of the 1930s frightened the public into hoarding gold, making the policy untenable.

Soon after taking office in March 1933, Roosevelt declared a nationwide bank moratorium in order to prevent a run on the banks by consumers lacking confidence in the economy. He also forbade banks to pay out gold or to export it. According to Keynesian economic theory, one of the best ways to fight off an economic downturn is to inflate the money supply. And increasing the amount of gold held by the Federal Reserve would in turn increase its power to inflate the money supply. Facing similar pressures, Britain had dropped the gold standard in 1931, and Roosevelt had taken note.

On April 5, 1933, Roosevelt ordered all gold coins and gold certificates in denominations of more than $100 turned in for other money. It required all persons to deliver all gold coin, gold bullion and gold certificates owned by them to the Federal Reserve by May 1 for the set price of $20.67 per ounce. By May 10, the government had taken in $300 million of gold coin and $470 million of gold certificates. Two months later, a joint resolution of Congress abrogated the gold clauses in many public and private obligations that required the debtor to repay the creditor in gold dollars of the same weight and fineness as those borrowed. In 1934, the government price of gold was increased to $35 per ounce, effectively increasing the gold on the Federal Reserve's balance sheets by 69 percent. This increase in assets allowed the Federal Reserve to further inflate the money supply.

Seems like an excellent day to read this. Enjoy. - GD

I like Paul. He means well and is one of the smartest people around. He is also a fool. PK thinks the answer to the worlds problems lie in the printing press. But, with apologies to Ronald Reagan, the Federal Reserve is not the solution. It's the problem.

I was not really linking to that blog post for anything that Dr. Krugman had to say there. I linked to that post simply because it was an easy place to find a reproduction of Barry Eichengreen's graph on the internet.

Those data speak for themselves. Paul Krugman's yea or nay has nothing to do with it. The gold standard was an idea that had outlived its usefulness and we are well rid of it.

Gdelassu,
There is a term (which escapes me at the moment) for the false logic that because B follows A, A is responsible for B. There are a huge number of factors which combined to create that graph of which moving off the gold standard was one, but only one. It's worth noting that those who push the Keynesian theory, have yet to actually end a major economic crisis by their favored methods (massive government stimulus and recourse to the printing press).

There are two main exhibits for the prosecution. The first being the Great Depression which despite the expenditure of staggering sums of money and an enormously increased debt, the United States was still afflicted with double digit unemployment on the eve of the Second World War. Henry Morgenthau (FDR's Treasury Secretary) conceded with uncharacteristic frankness in 1940 that the New Deal had been a monumental failure and waste of money.

The second exhibit is Japan's lost decade (going on two now). Despite expending sums of money, that FDR could only have dreamed of, in stimulus; Japan remains mired in one of the longest economic recessions in modern history. Japan's debt to GDP ratio is approaching 200% and has been sustained thus far only by the economic habits of the Japanese people who are among the thriftiest on the planet and who continue to buy Japanese government debt. Even so many Japanese economists are warning that Japan's day of reckoning is closer than their government wants to admit.

The main problem with debasing currency as a form of stimulus is that while in some cases it can give a temporary jolt, it is rather like a narcotic. The high you get is in fact temporary and each time you go back to the printing press you build up a tolerance. Easy money creates distortions in the markets and can over time have catastrophic consequences. Case in point... If the recent crisis is at least in part due to Wall Street bankers and real estate speculators gone on a massive drunk, the question needs to be asked... Who gave them the alcohol? The answer of course is Congress and the FED.

I am not (as some might be surprised to learn) a fan of a rigid gold standard. Not because its bad economics (although some flexibility in currency is desirable). But rather because it has never been sustainable. There has never been since Roman times a government that when confronted with a need for more money or too much debt, did not move to debase its currency. A gold standard does not prevent that because, as we found out in 1933, governments can repudiate it at will and just print money. I see no means of guaranteeing against that since our very Constitution (Art. I sec. 10) forbids using anything other than gold or silver for money, and yet here we are.

No. I do not favor a rigid gold standard. I favor sound money. However since that is something which has never really existed in a form that could not be abandoned at will, I encourage people to keep at least a part of their net worth or investments in gold and or silver as insurance against the insanity of politicians and the economic witch doctors who have been running this country since the 1930's.

I think that the fallacy whose name you want is "post hoc, ergo propter hoc." I grant you that it is a fallacy to suppose that one can infer causation merely from the fact that one thing follows another.

Incidentally, I notice that you spend a great deal of your reply critiquing Keynesian theory, but I have no idea what that has to do with my point. It is not as if only Keynesians think that it was a good idea to abandon the gold standard. Milton Friedman, for instance, advocated a complete break with the gold standard in favor of fiat money. That is because, as I said above, the gold standard is an idea that had outlived its usefulness. We are well rid of it.

Gdelassu,
Thanks for the Latin phrase. I could not remember it to save my life. In reviewing the substance of your most recent post I think we are talking past each other here.

I am not defending a rigid gold standard as I noted in my reply. I think it's untenable. The decision to abandon the gold standard however carried certain implications. Among them were...

1.It constituted a default on our national debt. Bonds sold prior to 1933 expressly promised payment in gold which was understood to be what was being lent to the government. When you borrow something and then unilaterally announce you are not going to return what you borrowed but instead give something that you have determined to be of equal value, that's a breach of contract in my book and I'd wager most reasonable people would call it the same thing.
2.The government did not stop there, but also seized people' privately owned gold, giving them no choice but to accept these colored pieces of paper with numbers on them as their only recompense. Adding insult to injury they “revalued” gold upwards by almost 70% a year after they expropriated everyone's.
3.And finally in support of 1 and 2 above, in one of the most unconstitutional and egregious abuses of power, they unilaterally voided elements of the vast majority of contracts in the United States designed to protect people from exactly the abuse then taking place.

Now we need to briefly address this magic graph. First it goes only to 1937. I find that curious since that was the year that most of the countries on the graph saw a major downturn in their economies which lasted in the United States until the eve of our entry into the Second World War. On which note Germany's massive economic growth (which was not stunted in 1937) can be laid at the feet of two far more important elements than abandonment of the gold standard (which Germany had really not been on since the last war). Those being the renunciation of the Treaty of Versailles and her war debts and then the Enabling Acts which reinstated universal military service and put the entire economy on a full war footing. That will do wonders for curing unemployment and increasing economic productivity, at least for a while. Likewise Britain's growth can be laid in part on three factors. First Britain avoided the mistake that France made of trying to nationalize large elements of its economy. Secondly, Britain also began to rearm during the 30's albeit far more slowly than Germany. And third, Britain began taking its first tentative steps towards dismantling its vast empire that had become an enormous millstone around their neck. The war would temporarily halt this. But the process resumed immediately after the shooting stopped.

All in all I am less than impressed by the conclusions assigned to the graph.

This blog has gotten way too political for me. I'm outa here. Used to be pretty good for Orthodox info. Bye now.