Jeffrey Epstein and the shadow of 1963 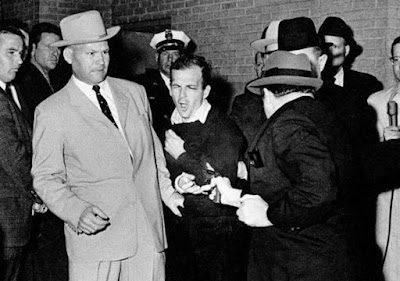 Not since Jack Ruby gunned down Lee H. Oswald has there been a death so likely to fuel conspiracy theories.


While I can understand the explosion of conspiracy theories over this, my gut says that Occam's razor applies. It is far more likely that one or more people dropped the ball and Epstein was able to kill himself. But in situations like this, truth and facts quickly become meaningless. There is a certain percentage of the population with a predisposition to conspiracy theorism who have long since decamped to their own "24" alternate reality, and they aren't coming home. But when things happen that look so bloody awful, it can push otherwise reasonable people into that dark alternative universe, at least when dealing with the given subject. The murder of President Kennedy being a prime example.
Posted by John (Ad Orientem) at 10:56 AM

Here is Rod Dreher's response to all of this:

If you want to call Dreher (or anyone else) who questions "the official story" kindergarten names like "conspiracy theorist" then that says far more about you than it does about him.

Speaking of "crazy conspiracy theories," how about the one that Saddam Hussein had "Weapons of mass destruction" and that he was behind the 9/11 attacks? Remember that howler? Colin Powell lied to God's face in front of the UN, and the "Mighty Wurlitzer" of the mainstream media orchestrated a big panic over this. As William Randolph Heart said about the Spanish-American War, "You supply the weapons and I will supply the war."

Or how about the "crazy conspiracy theory" promulgated ahead of Desert Storm that Iraqi troops were slaughtering babies in incubators? Remember that one? The public relations firm which concocted that hoax later testified in front of Congress and practically chortled at how easily Americans were fooled by that story.

Or how about the "Russia-gate" hoax (collapsing in ridicule as we speak)?

The main peddler of wacky, crazy hoaxes and "conspiracy theories" is none other than our Mainstream Media. Alex Jones et al. are absolute pikers in comparison. Please see Ron Unz's "American Pravda" series of articles for more examples.

Trump elected: It was the Russians and their [Dr. Evil pause] ONE HUNDRED THOUSAND DOLLARS worth of Facebook ads!

Death of a highly connected pederast in the most anticipated suicide in human history: I sleep.

"Not since Jack Ruby gunned down Lee H. Oswald has there been a death so likely to fuel conspiracy theories."

You must really be living in the moment, John. Perhaps you've not heard of RFK, MLK, Jimmy Hoffa, Elvis, or John Lennon?

I don't think any of those other cases hold a candle to the JFK murder (and Oswald's) or what just happened yesterday. It's so incredible that even though it's actually happened, I still can't believe it.

Well, solipsism is one thing, and history is another.

What if no one paid attention?