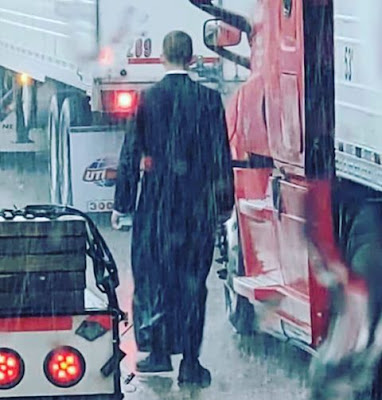 A picture of a lone priest walking along Highway 81 piqued the interest of thousands of Catholics this week.

Drenched with so much rain, the image appears as a Norman Rockwell work of art; the black of his cassock, heavy with water, could be streaks of oil paint. The priest, now identified as Father John Killackey, was stuck in a line of cars along the highway after six vehicles were involved in a crash on Interstate 81 South in East Hanover Township in Lebanon, Pennsylvania on July 8, 2020.

Traffic apparently had come to a stop due to heavy rain. One car, not noticing the stand-still traffic, ran into the stream of cars and the driver was seriously injured. Father Killackey went to work, walking between the cars and semi-trucks, offering help to those suffering. Father Killackey was able to administer last rites to one person, just before the driver died.

We now have learned quite a bit about Father Killackey. A native of Wayne, N.J., he just celebrated his first-year anniversary of entering the priesthood. Serving as assistant priest at the Mater Dei Community in Harrisburg, Pennsylvania, he is a member of the Priestly Fraternity of St. Peter.

I very much am humbled by his piety and sense of priestly ministry. May God raise up more like him.