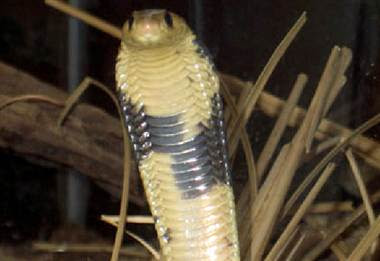 An Egyptian Cobra (cute NOT)

A venomous snake who went missing from New York’s Bronx Zoo may be eluding zookeepers, but thousands of fans have found her on Twitter.

The 20-inch Egyptian cobra hasn’t been seen since Friday afternoon, and is believed to be hiding somewhere in her zoo enclosure. However instead of searching crevices of the Reptile House for the pencil-thin snake, zoo workers might have better luck looking online.

“Holding very still in the snake exhibit at the Museum of Natural History. This is gonna be hilarious!” tweeted a spoof account called @BronxZoosCobra on Monday night. “Anyone know of a good vegan restaurant near Union Square?” she tweeted a couple of hours later.

While @BronxZoosCobra’s 30,000-and-growing fans enjoy her musings, ophidiophobics – those with a fear of snakes – may find the tweets funnier once she’s found.

Why does it always have to be snakes?
Posted by John (Ad Orientem) at 2:19 PM

Bronx Zoo staffers who are trying to track down the missing Egyptian cobra might want to check Twitter, which is now posting messages from the "cobra" as it explores New York City. Workers at the Bronx Zoo have been searching for the missing snake for the last three days without success.

She's not cute, but she is incredibly beautiful. God makes things terrible and sublime as well as cute. Hope they find her quickly for her good and the good of everyone else.