For Sale: One Aircraft Carrier 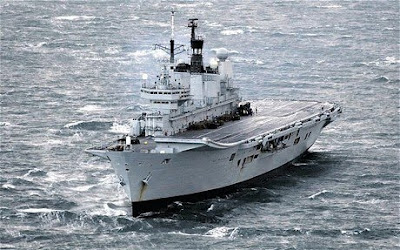 The Royal Navy's former flagship HMS Ark Royal has been put up for sale on the Ministry of Defence's auction website.

Just two weeks after the aircraft carrier was decommissioned at its home port of Portsmouth Naval Base, Hampshire, the Ark Royal has been advertised on the edisposals.com website.

The sale follows that of its sister ship HMS Invincible, which was towed away last week to a scrapyard in Turkey after being sold on the same internet site.

Although the Ark Royal could also be sold for its scrap metal, other proposals for it include a commercial heliport in London as well as a base for special forces to provide security at next year's Olympic Games.

And a move could be made to turn it into a nightclub and school in China.

Bidders have until 10am on June 13 to put their tenders forward for the ship. No minimum price is given.

As I have noted in the past, Britain is still an island country dependent on imports for food. Reducing the armed forces, especially the navy, to the point where they can not effectively defend the country is not a good idea.
Posted by John (Ad Orientem) at 11:58 AM

Their former Imperial subjects are already there in large numbers. The social democrats have pretty much gotten what they wanted (to the point where net tax producers are leaving at a rate not seen since the 1960's). So it seems the only thing Great Britain bothers defending itself from at this point is resurgent English nationalism. You don't need aircraft carriers for that.

It's all in the name of globalization, which, btw, Tony Blair is now (or rather, still) in the full-time business of promoting. The idea is for each country to self-destruct or be destroyed to make room for one world government. This is supposed to ensure peace in the world, or something.

Britain is getting poorer and more insignificant every year, and France to the east and North America to the west... I dont think they're very worried about defense, only offense against crappy African and Mid East countries for oil