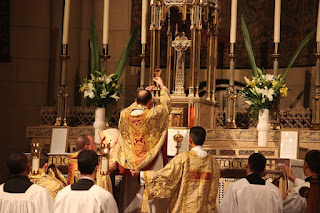 This has been mentioned in other, mostly Catholic, forums. But it is worth repeating. The Archdiocese of New York, which likely has more Catholics than all of the Orthodox combined in North America, ordained only one priest this year. That's the bad news. The good news is that the newly ordained Fr. D'Arcy made a very powerful statement by offering a Solemn High Mass according to the pre-Vatican II liturgical rites as his first Mass.

See the story and photos here.
Posted by John (Ad Orientem) at 6:07 PM