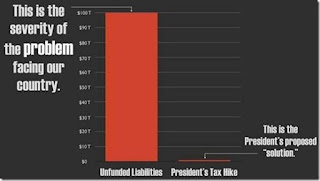 "America does have a long-run budget problem, thanks to our aging population and the rising cost of health care. However, the current deficit has nothing to do with that problem, and says nothing at all about the sustainability of our social insurance programs. Instead, it mainly reflects the depressed state of the economy — a depression that would be made even worse by attempts to shrink the deficit rapidly."

The Fiscal Cliff and the President's proposed solution is focused on the annual deficit. "Right now, given reasonable estimates of likely future growth and inflation, we would have a stable or declining ratio of debt to G.D.P. even if we had a $400 billion deficit." (As a comparison, federal debt was higher at the end of the Clinton years than at the beginning but because gross domestic product rose over those eight years, the ratio of debt to G.D.P. fell dramatically from 49 to 33 percent.)

The remaining $600 billion is completely attributable to the depressed economy. "First of all, the weakness of the economy has led directly to lower revenues; when G.D.P. falls, the federal tax take falls too, and in fact always falls substantially more in percentage terms. On top of that, revenue is temporarily depressed by tax breaks, notably the payroll tax cut, that have been put in place to support the economy but will be withdrawn as soon as the economy is stronger (or, unfortunately, even before then). If you do the math, it seems likely that full economic recovery would raise revenue by at least $450 billion. Meanwhile, the depressed economy has also temporarily raised spending, because more people qualify for unemployment insurance and means-tested programs like food stamps and Medicaid. A reasonable estimate is that economic recovery would reduce federal spending on such programs by at least $150 billion."

The increasing cost of entitlement programs and defense is an entirely different question. Medicare and Medicaid costs would have benefited from a better health care fix than Republicans and Libertarians allowed, though there is still the possibility that some of the cost-cutting feature of the ACA will work. Social Security is solvent as long as we can deal with the relatively short-term expansion of need handling the Baby Boomers. In both cases, it's the demographic bulge that is the problem, not the long-term viability or structure of the programs.

The good part of the total debt story is that the vast majority of that money is owed by America to Americans, not to China. China is the largest single lender and the debt of our that it holds is equal to the debt we owe all others, but we're still masters of our own destiny, so to speak, especially since we have our own currency (unlike Greece and Spain).