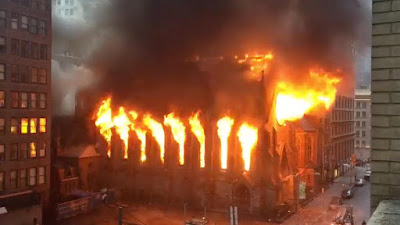 A historic Serbian Orthodox church in Manhattan that plays an important role in New York’s Serbian community was gutted by flames on Sunday, just hours after parishioners had filled its pews for Easter services.

The New York Fire Department said it received the first report of the blaze at the Serbian Orthodox Cathedral of St. Sava, on West 25th Street between Fifth Avenue and Avenue of the Americas in the Flatiron district, shortly before 7 p.m. It grew to a four-alarm fire that took 168 department personnel to tame, fire officials said.
It was not clear if anyone was at the church when the fire started, officials said. The priest had left before the blaze began to go on a bicycle ride after an Easter luncheon that stretched into the late afternoon and capped several busy days of religious celebrations, officials said. A caretaker who arrived after the fire started was treated for smoke inhalation but was not hospitalized, they said.

Frank Gribbon, a department spokesman who was at the scene on Sunday night, said the blaze did not appear to be suspicious. He said the department would investigate the cause, but cautioned that the amount of damage could complicate that effort.

“There is so much damage you can’t find the point of origin,” he said, adding, “The whole roof is a wooden truss. It’s gone.”

Prayers are requested. Lord have mercy!
Posted by John (Ad Orientem) at 10:36 AM

How tragic. My heart goes out to the Orthodox community there. Jesu mercy, Mary pray!

A sad and terrible loss. I had the tremendous good fortune of participating in the Divine Liturgy for Lazarus Saturday barely a week ago. My prayers to all who called that beautiful house of God their home.

There are reports that MULTIPLE Orthodox churches were torched at around the same time. "Not suspicious" ? Gimme a break!

Were it a mosque which was burned, every government agency known to man would be investigating at Sheik Barrack's orders, however, it was only an Orthodox church. "nothing to see here".