On this day in history... 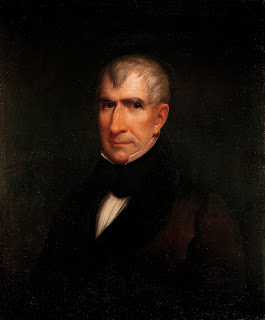 City of Washington April 4, 1841- An all-wise Providence having removed from this life, William Henry Harrison, late President of the United States, we have thought it our duty, in the recess of Congress, and in the absence of the Vice President from the Seat of Government, to make this afflicting bereavement known to the country, by this declaration, under our hands.

He died at the President's House, in this city, this fourth day of April, Anno Domini 1841, at thirty minutes before one o'clock in the morning.

The people of the United States, overwhelmed by an event so unexpected and so melancholy, will derive consolation from knowing that his death was calm and resigned, as his life has been patriotic, useful and distinguished; and that the last utterance of his lips expressed a fervent desire for the perpetuity of the Constitution, and the preservation of its true principals. In death, as in life, the happiness of his Country was uppermost in his thoughts.

Thomas Ewwing
Secretary of the Treasury