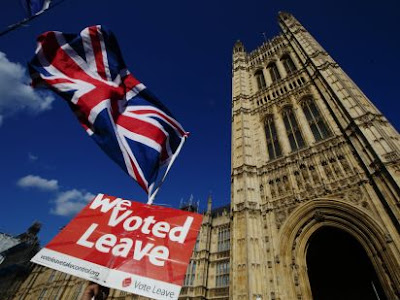 For those not keeping up on the news from the UK, here is the latest. Three years after the British people voted to leave the EU, Brexit is on life support. After Theresa May finally resigned and Boris Johnson won the Conservative leadership contest it looked like Britain was at along last going to exit the EU at the end of October. But the opponents of Brexit who have been plotting to obstruct, and ultimately kill it, have finally won what looks like the decisive battle. With the aid of about twenty Tory MP's who defied a three line whip, the remainers were able to strip the government of power over Brexit and then passed a law over the government's objection ordering it to seek yet another delay in Brexit. At this point that may require revoking article 50.

In response, Johnson quite rightly stripped the rebel MPs of the whip, effectively expelling them from the party. But he now finds himself the head of a minority government, humiliated by the Commons and deprived of all authority to carry out the mandate of the British people. Indeed, the government stands compelled by law to act in a manner completely contrary to its stated policy and the democratically expressed will of the nation.

This, it must not do.

The only honorable course is for the government to resign. He should announce his refusal to accede and lead the Conservative party into opposition. On Monday morning he should go to the Queen and surrender his seals office advising Her Majesty to invite Mr. Corbyn to form a government.

Those individuals and political parties who have orchestrated this premeditated and calculated attack on British democracy should be required to bear full responsibility for it. And in the next general election this should be the sole issue placed before the people.
Posted by John (Ad Orientem) at 5:00 PM