The Real Winner of the 2020 Election Crisis 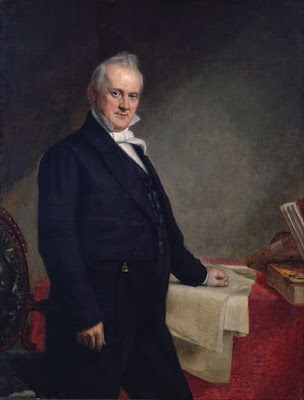 James Buchannan, the 15th President of the United States, has been trapped at the very bottom of the rankings of American presidents almost from the day he left office 160 years ago this coming March. His release from the historian's dungeon now appears imminent with a new occupant about to move in on January 20th.
Posted by John (Ad Orientem) at 12:34 PM

While normally I'm of the opinion that we can't really assess how good or bad a president is until they've been out of office for a good long while (i.e. I think we're now reaching a degree of temporal distance where historians can begin giving assessments of Nixon) since many of the long-term impacts of a president's decisions will not be readily apparent for many decades after they're gone, in the case of Trump I'm much more willing to accept an early assessment.

On the contrary, I see Trump as an excellent president who has begun to break with the oligarchy that has taken over the republic. I even hope that he will return to power in the next elections (I doubt that they will continue to defraud them so blatantly).

He will be too old by then

The only fraud has been perpetrated by Donald Trump.

I'm not [yet] prepared to state that Mr. Trump was a worse president than Mr. Buchanan [in terms of the damage he did to to the country].

But I think it's probably fair to say that Mr. Trump is the worst man who has served as president.