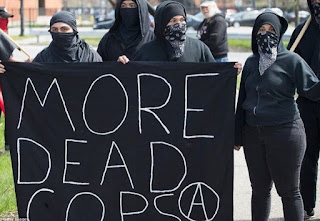 Keith Ellison, the deputy director of the Democratic National Committee and congressman from Minnesota, recently ignited a Twitter firestorm when he tweeted out a picture of Antifa: The Anti-Fascist Handbook, a book, he declared, that would “strike fear in the heart of” Donald Trump. Upon reading Antifa, it’s easy to see why the tweet generated so much controversy.

Since its release last August, the handbook, by Dartmouth lecturer Mark Bray, has garnered attention as one of the few windows available into the mind of the newly prominent Antifa movement. Bray makes clear from the beginning that the book isn’t an attempt at a neutral rehashing of facts, but rather “is an unabashedly partisan call to arms” for the purpose of equipping activists “with the history and theory necessary to defeat the resurgent Far Right.” He articulates clearly the revolutionary ideology of the far left and defends using violence in its service, from street brawls to kidnappings to assassinations. For those who do not desire to see the world reborn in the flames of global anti-capitalist revolution, the popularity of The Anti-Fascist Handbook should prove alarming.

Antifa’s somewhat obvious immediate goal is the eradication of (what Bray considers to be) fascism. However, conveniently for Antifa, Bray argues that anti-fascist action is not merely limited to academic and historical definitions of fascism. Instead, “anti-fascism is an illiberal politics of social revolutionism applied to fighting the Far Right, not only literal fascists.” This meaning speaks to the broader end of the revolutionary left that Bray sees Antifa as a part of. This end, Bray explains, is the total destruction of the current capitalist order via a violent “international popular uprising.”