For whom does this bell toll? 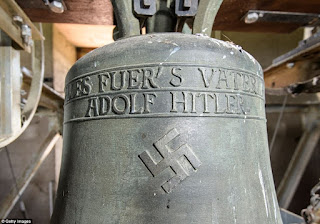 A village church in Germany recently discovered that one of its three bells has a dark past. It is inscribed with a swastika and an inscription that roughly translates as "Everything for the Fatherland  Adolf Hitler."

The church is described as Protestant which I am sort of assuming means Lutheran. After a rather heated debate that has drawn global interest (and commentary) they appear to have decided to leave the bell alone for now although there are plans to add some kind of plaque.

I am not unsympathetic to the conflicting views. After the war, first the Allies and then both East (Communist) and West Germany went on something of a campaign to eradicate monuments and buildings that it was feared might serve as some kind of rallying point for Nazi sympathizers. Laws were passed that forbade the public display of Nazi symbols and salutes. While a few structures with ties to the Third Reich survive, most were demolished or at least had any symbols stripped away.

But it has been almost three quarters of a century since the end of the war and many Germans are wondering if it isn't time to approach their past with out the kind of fear that, justifiably IMO, motivated their parents and grandparents to eradicate almost all physical reminders of that evil regime.

The options considered in this case were to leave the bell alone, move it to some kind of museum or simply melt it down. While I understand the emotional argument in favor of destroying the bell, I think its historical value would make some kind of preservation desirable. But as a Christian (forget Orthodox for the moment), I cannot conceive worshiping in a church with a Nazi bell ringing. It just beggars the imagination. The swastika along with the hammer and sickle are the two political symbols that I most closely associate with the demonic. To me it simply has no place in a church.
Posted by John (Ad Orientem) at 9:03 PM