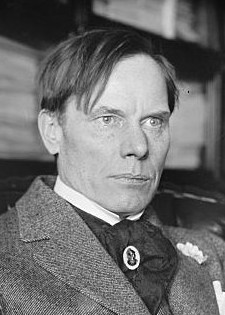 Probably not, and it's OK. I never heard of the guy until I checked to see when, if ever, New York has impeached a governor before. As it happens "plain Bill" Sulzer has the dubious distinction of being the one and only New York Governor to be impeached and removed from office.

In a nutshell he was a reform minded Democrat back when political machines ran both parties. He won the office in the 1912 election and promptly announced his support for bills to require open primaries that would determine the nominees for public office. The practice hitherto was that party bosses typically met over drinks and cigars to decide who their candidates would be. He also told Tammany Hall (the Democratic machine from downstate) where they could go when they sent him a list of party hacks they wanted given state jobs. Once the Democratic bosses figured out that Bill really meant the things he had promised in his campaign and that he was not in fact their boy, things got ugly. Suddenly, claims were made that he had lied under oath about some campaign finance money which it was said he actually used to buy stock for himself. And there were assertions he had been sued for "breach of promise" back in the 90s by some woman from Philadelphia among other salacious claims. Evidence supporting at least some of these claims appeared rather mysteriously with efforts to question or challenge said evidence being disallowed.

In short, historians largely agree that the whole thing was a frame up and the resulting impeachment and trial were a farce. The machine boys wanted him gone and they made it happen. He was governor for just over nine months.