The fading ghosts of the war to end all wars... 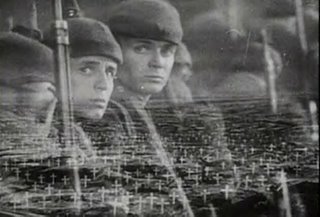 The number of surviving soldiers who went "over there" to make the world safe for democracy is now believed to be around twelve in this country. We are witnessing the last gasps of a generation that gave so much for their country and got very little back. If I were asked to rank the top five catastrophes of the western world post Roman Empire, World War I would be on that list. The horror of that war is incompressible to the modern world. Pray God it remains so.
Posted by John (Ad Orientem) at 2:31 AM

A waste indeed. The unnecessary involvement of the US in that useless war resulted in its unsatisfactory outcome. Without US involvement, the European states would have arrived at a territorial solution, as they had in earlier wars. The ushering in of the "total war" principle was a great evil.

I agree with k. However, the American "ascent to Empire" began with the Spanish-American War, another pointless war, and one that we only got into based on a manifest untruth ("Spain, Spain, remember the Maine"). I have long thought Woodrow Wilson to be one of the most detestable Presidents in American History: a ferocious racist, an early Christian Modernist whose modernism made him blind to the effects of son in his hubristic idealism about "a war to end all wars" and to "make the world safe for democracy and one who was willing (in this respect like the Bolshevists and the French Jacobins) willing to shed rivers of blood in pursuit of a utopia. If only the Central Powers had won by the end of 1914 ...

When the epitaph of the "American Empire" comes to be written, it could be done no better than to "recycle" what Tacitus wrote of the Emperor Galba (or was it Vitellius?): "Consensu omnium capax imperii nisi imperasset" although in out case we had best omit the "Consensu omnium ...".

Dr. Tighe,
I completely agree with your views of Wilson. I was always a bit careful in school about being too critical of him since it defies the liberal orthodoxy in academia. But Wilson really was a puritanical bigot with a messianic complex that in the modern world might leave people questioning someone’s mental health. I rank him below Nixon on my list of presidents. As for who should have won, I have no real preference. It did not concern the United States. But I think it’s a bit academic anyways. Whenever you wipe out the better part of a generation of human beings over some stupid quarrel in the Balkans there are no winners. World War I was the death knell of western civilization. Defeat was just more readily apparent to the central powers in 1918.

Well, in a calmer moment I would agree with you. Nevertheless, if a German victory could have averted the Russian Revolution, it would be a small price to have paid for avoiding the horror that was the USSR ("Hitler hath slain his millions, but Stalin his tens of millions") and its Chinese, Cuban, Ethiopian and Korean emulators (to mention but a few).

There is a certain point in your argument which is hard to refute. But I wonder what kind of peace the Kaiser would have dicted in Paris?

Well, I think that he would have dictated a different one in, say, December 1914 than he would in, say, June 1918. In the former case, the old order would have remained intact (with France being humiliated to a cripplng degree by the loss of Lorraine and a lot of colonies; Luxembourg and part of Belgium, if not the whole, incorporated into the
Reich; and Russia strippped of Poland (perhaps divided between Germany and Austria, with the latter maybe also acquiring part of Ukraine) and, perhaps, the Baltic litoral. Not a bad outcome, as I see it.

A German victory in 1918 would have been pretty awful, what with the Bolsheviks already in power (unless the Germans then went on to destroy them, and reduced a restored Russian czardom to its pre-1686 boundaries), but it could hardly be worse than what did happen in 1918. Of course, the Ottoman Empire would in that case survive, which I would regret ...