Florovsky on the Last Things (part 1) 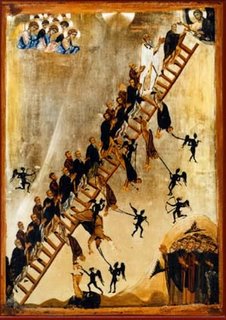 Eschatology was for a long time a neglected field in modern theology. The arrogant phrase of Ernst Troeltsch - "The bureau of eschatology is for the most part closed" - was distinctively characteristic of the whole liberal tradition, since the Age of the Enlightenment. Nor is this neglect for eschatological issues fully overcome in contemporary thought. In certain quarters eschatology is still regarded as an obsolete relic of the forlorn past. The theme itself is avoided, or it is summarily dismissed as unreal and irrelevant. The modern man is not concerned with the last events. This attitude of neglect was recently reinforced by the rise of theological Existentialism. Now, Existentialism does claim to be itself an eschatological doctrine. But it is a sheer abuse of terms. Eschatology is radically interiorized in its existentialist reinterpretation. It is actually swallowed up in the immediacy of personal decisions. In a sense, modern Existentialism in theology is but a fresh variation on the old Pietistic theme. In the last resort, it amounts to the radical dehistorization of the Christian faith. Events of history are eclipsed by the events of inner life. The Bible itself is used as a book of parables and patterns. History is no more than a passing frame. Eternity can be encountered and tasted at any time. History is no more a theological problem.

On the other hand, precisely in the last few decades, the basic historicity of the Christian faith has been reassessed and reaffirmed in various trends of contemporary theology. This was a momentous shift in theological thinking. Indeed, it was a return to Biblical faith. Of course, no elaborate "philosophy of history" can be found in the Bible. But there is in the Bible a comprehensive vision of history, a perspective of an unfolding time, running from a "beginning" to an "end," and guided by the sovereign will of God toward the accomplishment of His ultimate purpose. The Christian faith is primarily an obedient witness to the mighty deeds of God in history, which culminated, "in those last days," in the Advent of Christ and in His redemptive victory. Accordingly, Christian theology should be construed as a "Theology of History." Christian faith is grounded in events, not in ideas. The Creed itself is a historical witness, a witness to the saving or redemptive events, which are apprehended by faith as God's mighty deeds.

This recovery of the historic dimension of the Christian faith was bound to bring the eschatological theme into the focus of theological meditation. The Bible and the Creed are both pointing to the future. It has been recently suggested that Greek philosophy was inescapably "in the grip of the past." The category of the future was quite irrelevant in the Greek version of history. History was conceived as a rotation, with an inevitable return to the initial position, from which a new repetition of events was bound to start again. On the contrary, the Biblical view opens into the future, in which new things are to be disclosed and realized. And an ultimate realization of the divine purpose is anticipated in the future, beyond which no temporal movement can proceed - a state of consummation.

In the witty phrase of von Balthasar, "Eschatology is the 'eye of the storm' in, the theology of our time" (Hans Urs von Balthasar, "Eschatologie," Fragen der Theologie Heute. Feiner, Trütsch, Böckle, editors (Zürich: Köln, 1958), pp. 493-421). Indeed, it is a "subtle knot" in which all lines of theological thinking intersect and are inextricably woven together. Eschatology cannot be discussed as a special topic, as a separate article of belief. It can be understood only in the total perspective of the Christian faith. What is characteristic of contemporary theological thought is precisely the recovery of the eschatological dimension of the Christian faith. All articles of faith have an eschatological connotation. There is no common consensus in the contemporary theology of "the Last Things." There is rather a sharp conflict of views and opinions. But there is also a new widening of the perspective.

Emil Brunner's contribution to the current discussion was both provocative and constructive. His theology is a theology of hope and expectation, as it befits one who stands in the Reformed tradition. His theology is inwardly oriented toward "the Last Events." Yet, at many points, his vision is limited by his general theological presuppositions. Indeed, his theology reflects his personal experience of faith. (Cont)

I love this icon--I have a large reproduction on my desk!