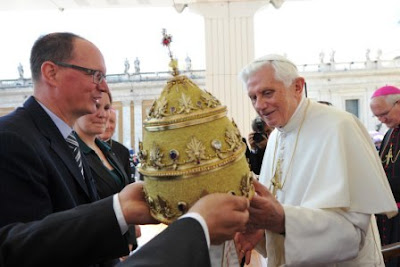 
At today's weekly general audience the Holy Father received a new tiara made for him and presented by Catholic and Orthodox Christians.

The tiara was commissioned by Dieter Philippi (http://www.dieter-philippi.de/), a German Catholic businessman who has a great devotion to the papacy as well as to the call to Christian unity.

The tiara was created in Sofia, Bulgaria by Orthodox Christians of the Liturgix studio (http://www.liturgix.com/).

Today a small delegation of Roman Catholics and Bulgarian Orthodox on pilgrimage in Rome had the honor to present the tiara to the Holy Father in the name of Christian unity.

On a side note, I am not certain about the involvement of Orthodox Christians and would caution against reading too much into this though I can all but guarantee that some of our Roman Catholic friends will latch onto this as yet further proof of imminent re-union.  The website for Liturgix does not identify themselves as Orthodox.  Rather they simply declare that they cater to both Orthodox and Eastern Rite Catholics.

At one time it was customary for the citizens of whatever city a newly elected Pope came from to commission a new tiara for the Pope for his coronation.  Obviously this custom died out after Paul VI abandoned the tiara in the 1960's.  All three of his successors have declined to revive its use with Benedict going so far as to remove the tiara entirely from his coat of arms.

Still, it's an impressive addition to the Vatican's collection of papal bling.
Posted by John (Ad Orientem) at 5:33 PM

One of my favourite stops while I was living in Rome was the Vatican Treasury which has a lot of the historical bling on display. Most of it is rather ho-hum, but then you get those wonders that just drop your jaw.

As for reading into this, from what I've seen there's nothing more to this than a gift. Like the Pope restoring ikons or giving certain holy relics as a gift, it should probably be seen as nothing more a gesture of good will. Though, I do pray for the day that Porsche will reunite with the Church of Rome after their last gift!

Anther case of all dressed up and no where to go?

Liturgix is owned by an Orthodox Christian who lived briefly in Arizona. I don't know is this makes it an "Orthodox company" or not. I ordered a cassock from them that didn't last very long.

Remember that the purpose of a vestment company is to make and sell vestments for whoever has the money. Even St. Elizabeth's Convent (Old Calendar Greek) will make Western vestments.

I'm interested in the bling from the 4th Crusade that hasn't been returned to New Rome.

Vis
Don't hold your breath. Such an undertaking would bankrupt half of Western Europe. They might be too polite to say it aloud but on this subject I think the famous American quip about Texas applies, "It's ours. We stole it fair and square."

PS It pains me to say this but most of those treasures are safer in Rome right now anyway. God knows what the Turks would do if even a fraction of the loot was sent to the EP.

"...most of those treasures are safer in Rome right now anyway"

God moves in mysterious ways. If those treasures had remained in Constantinople until 1453 what would have happened to them?

Let's hope this goes directly to the Papal Museum; the imperial papacy has been a great impediment to unity.

Carlos,
Another question might be along the lines of "would there have been a 1453 if not for the events of 1204?" While the Empire was weak at the close of the 12th century it was still vital. Most historians believe the sack of 1204 inflicted a mortal wound on the Empire which resulted in a slow lingering death.

In fairness the Empire would not likely have survived to the present day. But I think its demise was greatly hastened by the sack.

Of course, the other side of the historical coin is that if the Latin Empire had been successful and the Crusades achieved their goal, 1453 would have been an annus ignorabilis.

Two and a half centuries is a long time for a "mortal" wound to fester and kill the patient. Especially when Byzantium had been on the losing side of mohammedan engagements for six previous centuries.

Or perhaps they should have been a Byzantine operation not a Frankish one.

You turn that thing upside down and I'd be happy to drink beer out of it. Other than that, can't see much use.

I'm gratified to hear that Old Rome had been saving our bling for us from the Ottomans, like a saving account or a safe deposit box. How generous!

A man after my own heart. I'd join you in quaffing a Kölsch or your choice from a päpstlicher Tiarahumpen though it might be a bit of a problem setting it down, what with the Kreuzspitze. BTW, are you the odi profanum vulgus et arceo guy? I.e. the Ochlophobist ? If so, I'm sorry to see your blog vanish into the ether. If you are not going to post, at least leave it open -- you had a lot of well-written stuff there. For which, thanks.

Don't be so cynical. When Hagia Sophia is restored to the Patriarch and the Orthodox and Catholics in the mohammedan Near East can worship in peace, then is the time to return the treasures. In the interim, is it not now opportune for England to return the stolen Parthenon sculptures, the so-called Elgin marbles? Good blog by the way, I have watched that video, Христос воскресе, innumerable times on youtube. I like Divna's appearance towards the end. Check out all of Divna's videos. She is sublime! Beautful woman, beautiful voice, the soul of an angel. May the Field of the Blackbirds be restored to Serbia.

So, I come to an Orthodox blog, and the first thing I see is a reference to 1204.

Youse guys remind me of what some friends in Louisiana said about the neo-Confederate brigade: "They still fightin' the Wah."

Also--can the Ukrainian Catholics have their churches back, too? :D That deplorable theft was a lot more recent than 1204.

Diane, if that's the first thing you saw, you skipped a lot.

Funny how when 1204 rears it's head 1182 is studiously ignored. They couldn't possibly be related now could they?

Another ahistorical vacuum heard from.

Funny, how trampling on Orthodox rights has repercussions. Same with Polonization in the Ukraine.

May the Field of the Blackbirds be restored to Serbia.

James, thanks for your kind words about my meager blog. I don't want beer conoisseurs like you and Owen to become ill, but my lowbrow tastes run toward guzzling iced Buds. I'd have to seriously chill that tiara before quaffing.

What are doing scismatics in America?, Did God invite them?, ¿or was the tzar who sent them to extend its territory despite the fact that this territory was found by catholics?