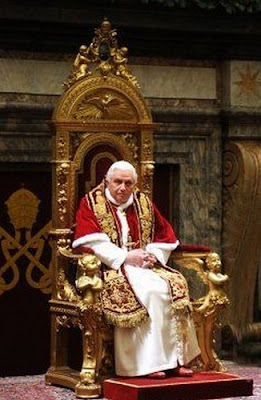 Pope Benedict XVI
Maybe I am reading more into this than I should.  But there has been the sound of distant thunder in the Roman Church, and it seems to be emanating from Rome.  When Benedict XVI was elected to the Papacy there was a collective groan heard from one end of the globe to the other as liberal Catholics reacted with shock, anger and more than a touch of fear at the prospect of the Panzer Kardinal taking his seat on the throne of Peter.  On the other hand conservative and all but the most radical Trad Catholics reacted with general approval.  He was their man.  And if there was one thing that both the conservatives and liberals were sure of, it was that the new Pope was going to clean house.

Except that he didn't.

To the dismay of the Catholic right (and the relief of the left) Benedict's reign could be characterized thus far as a moderately conservative one.  The mass purges of liberal bishops and theologians did not occur. Nor did he repudiate Vatican II.  And while he issued a document freeing the ancient liturgy of the Latin Church he has done little to suppress the reformed liturgy cooked up in the wake of the council, deeply distressing Catholic Traditionalists.

Indeed his pontificate thus far has been mostly focused on theological issues with his often very deep sermons and lectures, which he delights in giving to everyone from Cardinal Archbishops to the remarkably large crowds that appear at his Wednesday audiences.  To the extent he has addressed the highly polarized divide within the Roman Church between liberals and conservatives, he has emphasized a "hermeneutic of continuity," arguing that both sides have misrepresented the Second Vatican Council as a rupture with the Church's past teachings.

But of late there have been some interesting signs that after six years on the job he may be flexing some pontifical muscles long unused.  Consider just a few recent events...
It is always dicey trying to read too much into the motives of the Holy See.  And it is possible that a lot of this could just be coincidence.  But I doubt it.  An educated guess is that Benedict has grown tired of all the abuses that have been going on and is making some selective examples in an effort to curb at least the worst offenders.  It is also possible that he is becoming more cognizant of his age, and his mortality.  While no rumors concerning his health have reached my ears or inbox, when you are in your 80's its hard not consider how much time you have left and what you want to accomplish before God calls you into retirement.
But while no rumors about the Pope's health have reached me, I can say that posts and comments in the more liberal corners of Catholic blogdom suggests that they are sitting up and taking notice of the Roman thunder.  Some are wondering if this is the beginning of the long feared counter-revolution.

I find it amazing that the Panzer Kardinal has had a rather interesting pontificate. he is anything but highhanded, and considering he is a Vatican II theologian, he is more conservative now than in his youth. I am sure his office and the time working with the late JPII, and the problems that have been brewing over the years is cause for great concern. Frankly I pray God gives him at least 8 more years of health and sure guidance.

David Garner made the exact point I, as a Catholic, was wondering about on an Orthodox blog. I can't help but think that the Holy Father would like to be much more heavy-handed, but in an effort not to reignite a lot of the debates over papal authority that came about around the time of the First Vatican Council, he has tried persuasion and catechesis over assertion and discipline.

I'm sure this is done with an eye towards Constantinople and Moscow, but the irony of course is that so long as the Pope takes the more conciliar approach, abuses and heretical problems that hurt unity between Catholic and Orthodox believers are perpetuated, while if he addresses the problems in a more traditional manner, it only highlights the divisions that already exist between Catholics and the Orthodox over the role and nature of the papacy.

In the end, though, I think it's clear that progressives in the Catholic Church really do have reason to be concerned (and rightly so), and traditionalists need to back off a little and understand how precarious the Holy Father's situation really is. It astounds me how many Catholic observers appear to think that if the Pope just donned the tiara, suppressed the Novus Ordo, and forced everyone to behave entirely in conjunction with the "mens" of the Holy Father, then all our problems would be solved.

I would not say he is comfortable bypassing the bishop's conferences but they are refusing to do the right thing and he has to step in. Left to its own devices the Catholic Church in England would still be ostracizing and vilifying Anglo-Catholics.

Pray for me to the Lord our God

If the only hope for Rome is increasing exercise of papal authority to deal with whackiness, it seems that implies an ever increasing distance from any form of governance that would allow for Rome to move closer to Orthodoxy. But then again I assume no one really cares.

Hey, just consider these actions exercises of his patriarchial office! All the mentioned actions are within the Latin church.

That's a fair point, Gabriel. It occurred to me that reunification (and we have many more issues to reunification than this) would actually help his position. I certainly believe he'd have support from his fellow Patriarchs in a unified Church. As it is, it looks like the hammer being dropped from on high even doing the things he's doing now, much less any real exercise of authority.

I think it highlights that the Catholic Church has a lot of work to do that will take many years to sort out and patience is in order. As an Orthodox Christian, I can only observe we have our own back door to sweep around in that regard.

David, I so much appreciate your comment above. It helps me understand that I must do the very same as a Roman Catholic Christian. Thank you so much!

John, I think your piece on the Roman Catholic Church is spot on, and gives a great deal of good things to work with. Your writing hit close to home for me, in a good way, as a Roman Catholic.

While I can't speak for every last RC, I think one of the things that helps keep me sane is that we RC's are a family of Christians striving to live out, however feebly, our baptismal covenant. And it's always done feebly, because we are human, and because we are poor sinners. This helps me make sense of the crazy and confusing stuff going on in our household of faith.

Blessed Augustine of Hippo observed that "we are at the same time just and sinful."

Unfortunately, I think often we RC's (and not necessarily every last RC) hide behind this statement to justify whatever axe we happen to be grinding. How many times I've heard, "That's all part of being Church," or, "That's part and parcel of what growing your Church is all about."

With respect, it's a little more complex than that, folks.

If there's ever going to be a reunification between Rome and Orthodoxy, then both sides, it seems to me, must not only agree on the magnitude of what divides us, but what it is that divides us in the first place. I believe there is a very naiive optimism on the part of Rome (and again, not every last RC, of course) in terms of reunion.

With respect to my fellow RC brothers and sisters, I believe that you Orthodox, in the event that we actually do bring stuff to the table, make NO concessions whatsoever. I hope you stand your ground. I'm not trying to be a sycophant here, but I sincerely believe we need to follow your example in this regard.

None of us RC's, hopefully at least, would never dream of diluting cancer medication, a vaccine, or soup in a bread line, but we sure as hell can toss hundreds of years of spiritual nourishment out the window in the name of gaining more converts, not to mention in the name of being "relevant" and politically correct.

Lord Jesus Christ, Son of God, have mercy on me, a sinner.

John, I meant to say above that none of RC's hopefully would ever, not never, dream of. I'm sorry for my mistake.