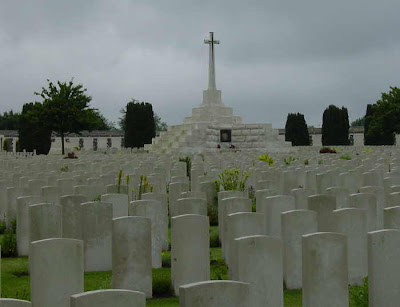 One of the great cemeteries populated by the First World War

(I wrote this essay several years ago but think it worth reposting.)

From my grandmother and my cousin Sarah Jane (memory eternal) I gleaned the story of my great-uncle Francis Guy (known as Guy in the family). He was one of the older children (14 in all) of my great-grandparents who lived in Endicott New York at the turn of the last century. My great-grandfather was by all accounts a good man, hard working and God fearing as they used to say in those days. But he also had a reputation for being stubborn with a "my way or the highway" mentality.

By contrast my uncle Guy was a shy youth in his middle teens who had been born with some minor disfigurement on his face to which no one really paid any notice other than him. But he was very self conscious about it. In 1914 my great grandfather wanted him to get a job at the local shoe manufacturing plant run by the Endicott Johnson company, then the biggest by far employer in my home town. Guy was perfectly OK with this. But he asked if he could set aside a small amount of his earnings to save for an operation which he felt would remove the offending birth mark. My great-grandfather said no. He was a man who believed that if you were born that way, it’s what God intended and that’s the end of it.

Well he was also not very diplomatic about it and there was an argument, a real barn burner by all accounts. When it was over an ultimatum was given to the boy; do as you’re told or get out and make your own way in the world. In the heat of anger and hurt Guy left home.

Now at this time what would become known as the Great War had just broken out in Europe. Guy like a lot of kids of his generation had rather romantic notions about war. The United States had not fought a really serious one in almost sixty years and memory dulls with time. With the United States still neutral and in need of a job Guy struck out for Canada where he enlisted in the Royal Canadian Army (Canada was part of the British Empire then). I am not sure if he lied about his age. He landed in the Princess Patricia Regiment which would gain great fame in the war. After preliminary training the regiment was shipped to England and then over to the continent where it joined up with the British Expeditionary Force holding the left wing of the Allied line with the Belgian Army in one of the few parts of Belgium not occupied by the Germans.

In February of 1915 during one of the innumerable back and forth battles near Ypres his unit assaulted the German trench works. The attack was repelled with the customary horrific casualties but Guy made it back to his own trench unharmed. When he looked back over the battlefield known as no man’s land between the opposing trench lines he saw amongst the human wreckage of war one of his close friends lying wounded. The odds of surviving in no man’s land were not good since neither side respected stretcher bearers or medics. The wounded were usually left to die. Guy leapt out of the relative safety of his trench and rushed forward to save his buddy. He reached him and under heavy fire dragged him back to the trench. After lowering the wounded soldier down Guy turned to drop down himself when he was shot in the stomach. He died several days later at a military hospital and was buried in one of the vast cemeteries near Ypres created by the carnage of the War to End All Wars.

My great-grandparents received the telegram while watching a silent movie at the local cinema house. The lights were turned on and half the town showed up to express their sympathy. The Canadian Army later (and retroactively) conferred the Military Medal on him posthumously which my great-grandmother was buried with. I am told that in Ottawa there is a book on display with the names of all of the dead of the Princess Patricia Regiment inscribed in it. A page is ceremoniously turned each day. On one of those pages is the name of an Irish-Catholic kid with a birth mark from a small town in upstate New York, Francis Guy Dwyer. Eternal rest grant unto him O Lord, and let perpetual light shine upon him.

Old men declare war. But it is the young who must fight and die.
-Herbert Hoover

Take up our quarrel with the foe:
To you from failing hands we throw
The torch; be yours to hold it high.
If ye break faith with us who die
We shall not sleep, though poppies grow
In Flanders fields.
Posted by John (Ad Orientem) at 3:03 AM

This would be the page: http://www.veterans.gc.ca/content/collections/books/bww1/ww1013.jpg

If you would like to obtain his service file, I can assist if you wish.

May his memory be eternal.

My great uncle, John Bernard Mary Goettke, is buried in France, having been shot down in World War II, as a recon pilot.

A dear friend of his visited our family many years ago; he was on a ship with John, and said that on Easter Sunday, John heard three Masses and served two of them.

May his soul, and the souls of all the faithful departed, through the Mercy of God, rest in peace. Amen.