The Origins of the Red Carpet Treatment 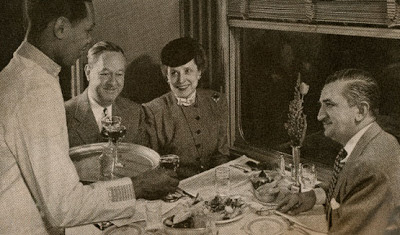 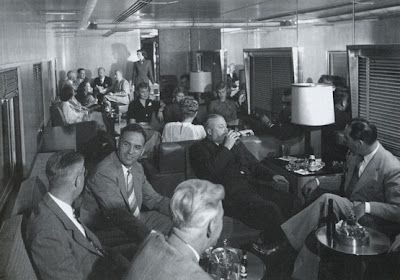 Have you wondered where the much-overused phrase “the red carpet treatment” originated?

It all started with the 20th Century Limited.

The “Century” was an express passenger train operated by the New York Central nightly from New York to Chicago. From 1938 until the last run in 1968, passengers walked down a crimson carpet to their waiting cars. This was only done for the departure from New York. Stretching from the observation car to the engine – the football field length rug was specially designed for the Century – thus, the "red carpet treatment" was born.

Travel time was less than sixteen hours each way between the two cities during its streamlined years.

If leaving from New York, you departed at 6 p.m. and arrived the next morning in Chicago at 8:45 a.m. Settling in for the evening, after boarding the Century in downtown Manhattan, you enjoyed cocktails in the observation car, dinner with views of the Hudson, a good night sleep and then with breakfast in bed or in the dining car. Dress was business formal with no room for baseball caps. Standing in line for security, enduring a long cab ride or enduring hours on the tarmac because of bad weather were not included in your first class Pullman fare.

The glamorous departure aboard New York Central’s 20th Century Limited was equal to a sailing on the Queen Mary, Liberte or United States. This was still the only way to “cross the pond” from New York to Europe into the 1950s and Pullman was the only way to travel overnight by train in America.

Oh how I loathe the modern world.
Posted by John (Ad Orientem) at 1:28 AM

As someone who in September boarded the Chicago-NYC Amtrak train to go to St. Vladimir's, I share your loathing of the modern world. It was a gruesome affair, nearly 20 hours long, with inexplicable delays, and not a scintilla of the former glories--Pullman cars and all the rest junked for modern so-called conveniences and inedible food.

The Brotherhood of Sleeping Car Porters was the first black led union accepted into the AFL. There is a decent Wiki page on them here:
http://en.wikipedia.org/wiki/Brotherhood_of_Sleeping_Car_Porters