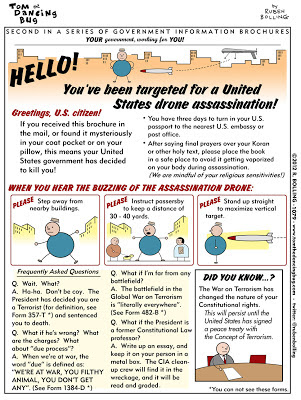 Legal experts expressed grave reservations Tuesday about an Obama administration memo concluding that the United States can order the killing of American citizens believed to be affiliated with al-Qaida — with one saying the White House was acting as “judge, jury and executioner.”

The experts said that the memo, first obtained by NBC News, threatened constitutional rights and dangerously expanded the definition of national self-defense and of what constitutes an imminent attack.

Obama should be impeached and put on trial for murder.
Posted by John (Ad Orientem) at 6:36 PM

I hope I'm wrong, but I have a feeling he is going to get away with murder.

I yelled the same thing at conservatives when they all got on board for the PATRIOT Act. Nobody thinks their own ox will get gored.

This is a natural consequence of reducing citizenship to administrative criteria and passing it out like candy.

PS: Good to see you back in business, John. God bless friend.

It seems we are in the equivalent of the late Roman Republic period, just before the start of the civil wars and proscriptions that ended with the accession of Caesar Augustus. If you read Spengler, Toynbee, Ibn Khaldun and other macro-historians, you realize that humanity has seen this movie before. Here is the script:

1. The Unites States started building its imperial system with the Spanish-American War. After WW II, it picked up the pieces of the British Empire, being the only industrialized country in the world at that time, which had not been bombed back into the Stone Age.

2. After WW II, the "New Deal Compromise" which allowed all classes of society (blue-collar and white-collar workers, as well as the owners of America, its rentier classes) to share in an expanding economy, was funded by means of imperial tribute from Third World countries. The U.S., with about 6% of the world's population, has been consuming over 30 percent of the world's natural resources. Access to those resources was guaranteed by the worldwide presence of the armed forces of the United States. Their purpose was to get rid of pests like Arbenz in Guatemala, or Mossadegh in Iran, who credibly threatened to interrupt the flow of imperial tribute.

In Roman history, this corresponds to the end of the Punic Wars, with JFK and RFK as the modern counterparts to the Gracchi brothers.

3. As other industrial economies rebuilt after the war, the American monopoly on the world's resources began to be challenged. By 1980, all classes in American society could no longer share in an expanding pie. The first class to be thrown under the bus were the blue-collar workers, whose jobs were automated and outsourced. This was instigated by the rentier class, with the co-operation of the white-collar middle classes.

4. Now, it is the turn of the white-collar classes to feel the pain. The rentier class is now throwing the middle class to the sharks. Unfortunately for the rentiers, the middle classes are educated as well as armed. Also, the loyalty of the minion classes (law enforcement, National Guard), some of whom have consciences and take their oaths of office seriously, cannot be guaranteed. Hence, the need for domestic drones and Blackwater mercenaries in places like New Orleans after Katrina. That is the point we are at now. In Roman history, we are up to the time of Sulla.

5. The next step? Once the middle classes have been crushed, the rentiers (and their respective clienteles and mercenary gangs and armies) will next turn upon each other. We are already seeing hints of this, with the purge of Petraeus and other generals. That will be when the true civil war, with mass purges and proscriptions, start. Think Sulla, Crassus, Pompey, et al.

6. After that? When the Empire has consumed itself, like the mythical Ouroboros swallowing its own tail, and the rubble from the civil war stops bouncing, whoever is left standing becomes our new emperor. Hail Caesar!

How hard will this landing be? I don't know. The only thing we can try to do, is cushion the blow for ourselves as best we can. I don't see a political solution to this. Trying to stop this is like ordering the tides around.