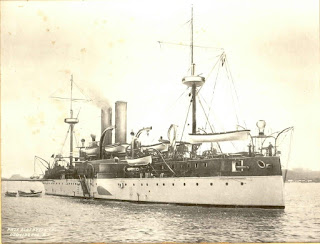 On this date in 1898 the USS Maine exploded in Havana Cuba, then a Spanish colony, killing 266 sailors and marines. Americans quickly blamed Spain for the ship's destruction and despite resistance from President McKinley war was declared on April 25th. It is now almost universally accepted that the ship's destruction was accidental.
Posted by John (Ad Orientem) at 7:34 PM