Scotland Says "No" to Secession 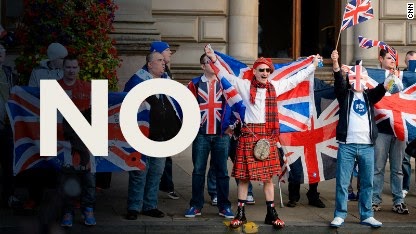 Scotland has decisively rejected secession from Great Britain. If the current figures hold, the margin of defeat for the nationalists will be near a super-majority of 10 pts. Such a sharp rejection of the proposal should put an end to any serious threat of dis-union for the foreseeable future and cannot be seen as anything other than an electoral rebuke to the SNP.

Still, Westminster would be gravely mistaken in taking too much comfort from this victory. A significant percentage of Scots did vote to secede.  And it is probable that at least some of the No votes were reluctant ones, likely based  more on pragmatic concerns than any affection for the United Kingdom. Clearly there is a strong undercurrent of dissatisfaction north of the border.
Posted by John (Ad Orientem) at 2:00 AM

The Scots rationally voted for continued transfer payments from England.